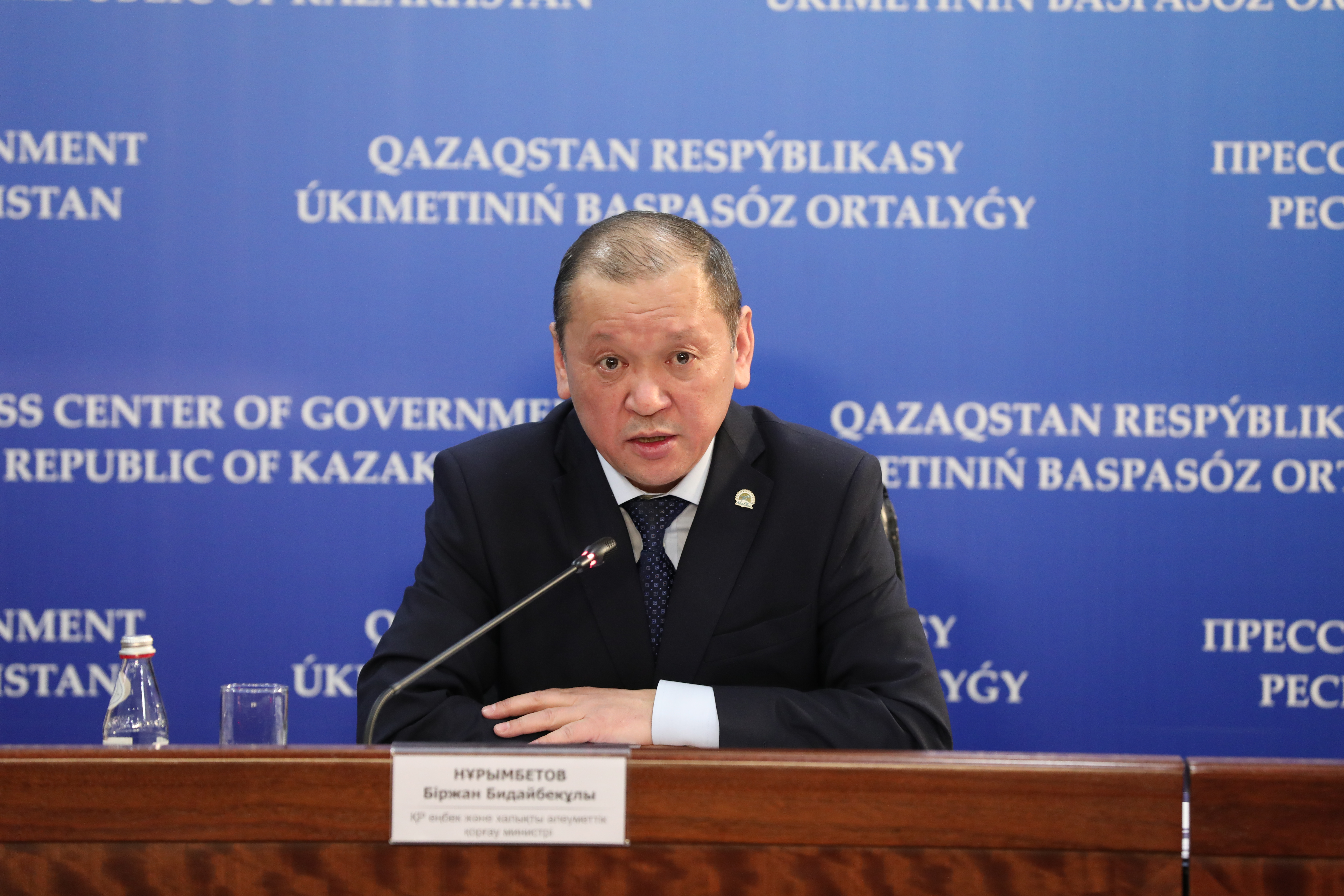 At the press conference in the press center of the Government, the Minister of Labor and Social Protection of the Population Birzhan Nurymbetov clarified further improvements to the pension system in Kazakhstan.

In the Address to the people of Kazakhstan dated Sep. 2, 2019, the Head of State instructed the Government to submit proposals by the end of 2019 on the possibility of targeted use by working citizens of part of their pension savings.

To consider this request, a working group was created under the Government chaired by the Deputy Prime Minister Berdibek Saparbayev. The members of the working group studied the current state and development prospects of the funded pension system, possible risks, international experience, and took into account preliminary actuarial calculations on the sustainability of the Unified National Pensions Fund.

The developed approaches were supported by the majority of the working group members, approved by the Economic Policy Council and received the approval of the Head of State as “the first step in solving this important issue.”

Given this, the government proposed further improvement of the funded pension system. In addition, there is a need to solve several problems. The first is that Kazakhstan’s funded pension system is very young. It is only 21 years old. In general, in developed countries, the formation of the pension system requires 35-40 years. The second is the low income level of the population. The third — untimely payment of mandatory pension contributions. Today, about 100 thousand entrepreneurs do not make pension contributions for their employees. There are 2.7 billion tenge of debts. Fourth, investment income is not being built up properly.

The working group proposed several options for using part of the pension savings.

The first category — working citizens who are offered to grant the right to use part of their pension savings to purchase housing or expensive treatment (according to a separate list) — these are UNPF depositors who have pension savings that exceed the “sufficiency threshold.”

Moreover, the threshold of sufficiency was calculated by the UNPF for each age separately, for men and women. It was taken into account that people of a younger age have a longer period of future work (until they reach retirement age) to continue accumulating.

The sufficiency threshold proposed by the UNPF is the minimum threshold amount of pension savings that must be accumulated by an average contributor who is constantly participating in a funded pension system (that is, regularly paying pension contributions), taking into account subsequent replenishment to the amount necessary to ensure lifetime payments, at the expense of new contributions and investment income. The younger the contributor, the lower the sufficiency threshold.

“For a 50-year-old man, the sufficiency threshold is 7.2 million tenge. He will save another 13 years of pension savings. We have 2,906 of them,” the minister said.

According to the ministry, as of November 2019, 113 thousand Kazakhstanis can use this right.

“Today we will think about what else can be envisaged to increase the number of people who can use this right to 500-700 thousand people. The President gave another two months for us to work out these proposals,” Nurymbetov noted.

The second category is held retirees, who are offered to use 50% of their pension savings for housing or expensive treatment. In this case, a prerequisite is the amount of the assigned pension (basic, joint and funded), which ensures replacement of lost income at a level of at least 40%, which corresponds to international standards. There are 119.5 thousand of such pensioners.

“Today, according to the law, people who have reached retirement age can take money from the savings fund only on a monthly basis. Now we want to allow them to immediately take 50% of their savings. But provided that the monthly payment of the remaining amount plus the basic and joint pension of not less than 40% of the income with which he retired,” the minister said.

Nurymbetov noted that all these proposals were voiced during the extended Government session with the participation of the Head of State.

“The President expressed his opinion on this issue, noting that ‘the first step in resolving this important issue’ has been taken. Our goal is not to give out all the savings from the accumulative pension fund, since they are necessary for a decent provision in the old age of our citizens. The head of state emphasized that ‘the issues of combating the shadow economy and increasing the share of cashless payments should remain a priority for both the National Bank and the Government,” Nurymbetov said.

To date, the Roadmap for the further development of the pension system in the Republic of Kazakhstan for 2020-2024 is being developed. On behalf of the President, work will also be continued to gradually expand the circle of citizens who will be given the opportunity to target use part of their pension savings.

The introduction of 5% of the compulsory pension contributions of the employer, which should be paid in favor of workers, was postponed from 2020 to 2023. Thus, in Kazakhstan a pension system will be built based on the joint responsibility of the state, employer and employee.

“Today the state pays 2.2 million people. This is about 2.4 trillion tenge. The state pays a guarantee to those who leave with a funded pension system and whose investment income does not exceed inflation. The employee himself pays 10% from his salary. The Concept stated that employers were also liable in the form of 5% funded contributions for employees to the funded pension fund. The law was adopted and was to enter into force on Jan. 1, 2020. But in his Address, the President, taking into account the views and appeals of the business community, moved the adoption of the law to 2023,” Nurymbetov said.

The draft Roadmap provides proposals for further improving the system of minimum guarantees (including the methodology for determining the size of the minimum pension and other socially significant indicators) and the introduction of a minimum guaranteed pension.

“The introduction of a minimum guaranteed pension was also spelled out in the Concept for the modernization of the pension system. It is very important. Since 1998, we switched to a funded pension system. Today, a solidary or labor pension paid by the state is received by citizens who have earned at least 6 months of service until January 1998. And such people every year less and less. Today, men born in 1957 are already retiring and they no longer have the full required length of service and, accordingly, a full pension,” Nurymbetov said.

Thus, according to the minister, the joint component of the pension system will be gradually phased out. And in 2043, theoretically, there will be no people who will be assigned a retirement pension. There will be only a basic pension. Therefore, the Ministry of Labor and Social Protection of the Population proposed to introduce a minimum guaranteed pension in Kazakhstan in 2028. It will replace today's basic retirement benefit. If today the basic pension payment for those who have an experience of less than 10 years is 54% of the subsistence minimum, then the experience is taken into account. The ministry proposes that the minimum guaranteed pension is intended for those who have less than 5 years of experience, and should be at least 70% of the subsistence minimum and could further increase to 1.5 of the subsistence minimum.