Amendments in the field of electric power industry, construction of generating plants, potential for development of nuclear energy — state of thermal power in Kazakhstan today 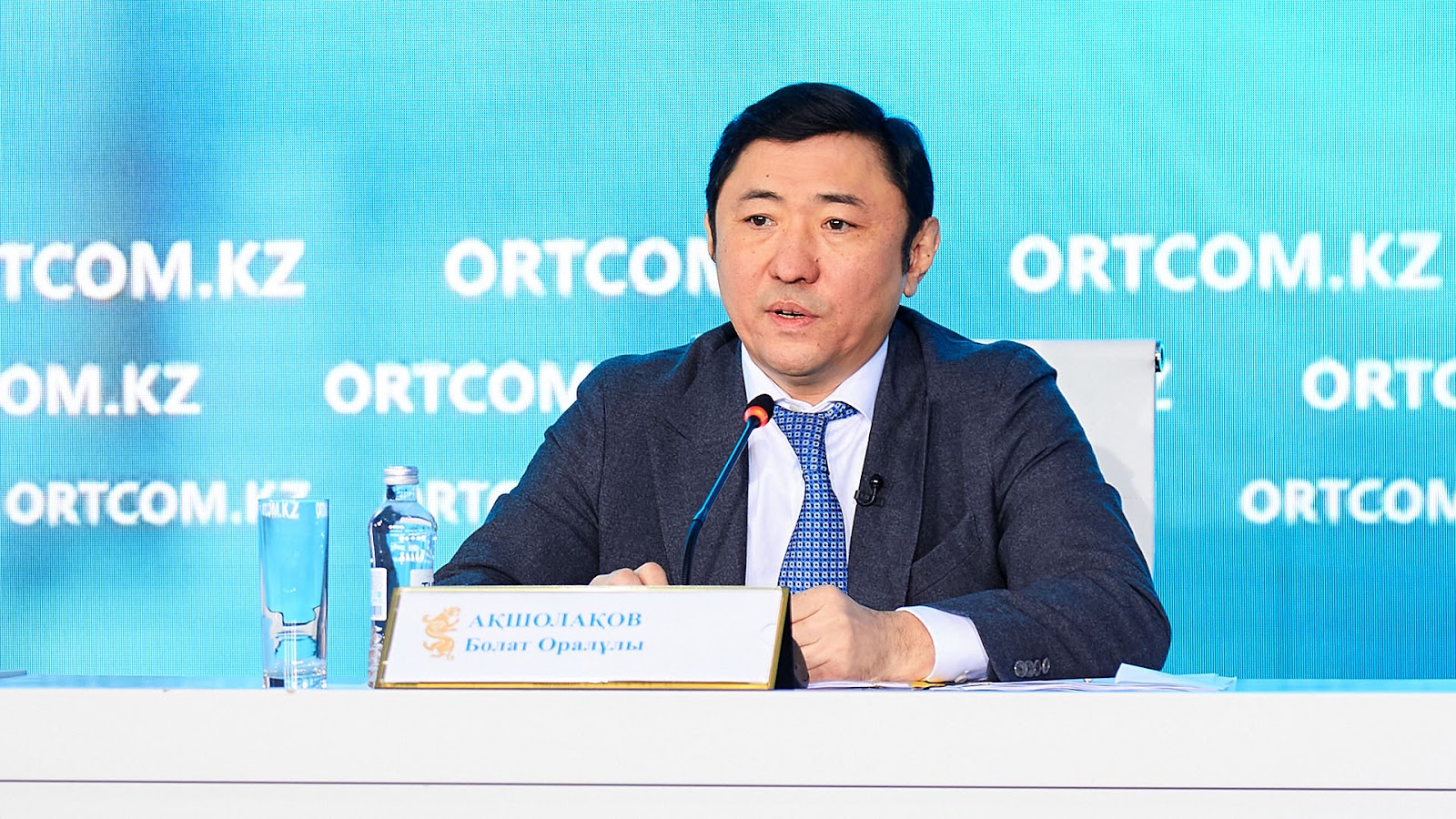 At a briefing in the Central Communications Service, Minister of Energy of the Republic of Kazakhstan Bulat Aqchulaqov reported on the problems of thermal power in Kazakhstan.

Informing about the current situation in the energy system of the republic, Aqchulaqov said that today in the country 214 power plants of various forms of ownership generate electricity. The available capacity of power plants was 20.1 GW.

“As of Feb. 11, 2022, operating capacity is about 15 GW, the difference between the available and operating capacity is due to the lack of participation of renewable energy facilities in scheduled and emergency repairs at obsolete energy sources in the country and in the balance. In 2021, there was a sharp increase in electricity consumption and it amounted to 113.89 billion kWh, which is 6.1% higher than in 2020. At the end of 2021, the volume of electricity production amounted to 114.4 billion kWh, or 105.89% of the volume of 2020. At the end of 2021, the share of generating sources by type of fuel in the production structure is as follows: coal — 69%; on gas — 20%; at hydroelectric power plants (without small hydroelectric power plants) — 7.4%; on RES (SPP, WPP, small hydropower plants, biogas plants) — 3.6%,” said the Minister of Energy.

Statistical analysis shows that until 2021, when there were not so many surplus consumers in the country, electricity consumption grew by an average of 2% per year. In 2021, consumption growth compared to the same period last year far exceeded these figures and amounted to 6.1%. At the same time, in the southern zone of the Unified Electric Power System, this figure was 12%.

Today, the Unified Electricity System of the Republic of Kazakhstan operates in a self-balanced manner. At the same time, the energy system experiences a shortage of electric power during peak hours, which is due to more frequent emergency shutdowns of the equipment of energy-producing organizations, as well as a sharp increase in connected capacity.

The head of the Ministry of Energy of the Republic of Kazakhstan noted that, according to the department, the main reason for the growth in demand was the activity of digital mining entities. It should be noted that cryptocurrency mining is an extremely energy-intensive process. At the same time, individual models of equipment consume about 2.5-3 kWh, which gives the monthly consumption of one piece of equipment, which exceeds the consumption of a three-room apartment by 8 times. At present, in order to prevent serious consequences associated with restrictions among the population, the System Operator is taking all necessary measures on a daily basis.

“The Ministry of Energy introduced amendments to some regulatory legal acts in the field of electric power industry. On Feb. 8, 2022, during an expanded meeting of the Government of the Republic of Kazakhstan, the Head of State was instructed to take measures to identify and conduct verification activities in relation to illegally operating digital mining entities. Currently, measures are being taken, they are aimed at combating the so-called ‘shadow’ subjects of digital mining,” said the head of the Ministry of Energy.

The southern zone is the place of concentration of projects for the commissioning of new generation. Until 2026, it is planned to build 7 generating units in the southern regions with a total capacity of about 3,050 MW, some of which will be sold through the auction mechanism, which allows to reduce the load on the tariff for end consumers as much as possible.

“Also, in order to ensure the stable functioning of the energy system and the full supply of the country's economy with electricity, the Ministry of Energy has concluded 13 investment agreements with existing energy-producing organizations. According to the results, it is planned to commission additional electric power with a volume of about 1,600 MW, of which coal and gas are about 950 MW and 650 MW, respectively. Also, within the framework of the Development Plan for the hydropower industry of the Republic of Kazakhstan until 2030, it is planned to commission about 1,500 MW of electric power using the hydrodynamic energy of water,” said Aqchulaqov.

At the same time, the Government has developed the energy balance of the country until 2035. An analysis was made of the current state of the energy industry in Kazakhstan by sector and, in accordance with the simulation of production-consumption balances, taking into account the prospects for the development of generation in the context of sources, as well as the commissioning of new consumers, the necessary amount of electric power required for commissioning was developed.

By the way, the need to introduce basic generation for the stable operation of the country's energy system, the low installed capacity utilization factor and the instability of renewable energy generation, the global carbon neutrality agenda and Kazakhstan's obligations to reduce greenhouse gas emissions push for the need to develop safe and stable nuclear energy in Kazakhstan. The implementation of all planned projects will make it possible to cover the deficit of both basic and control power, ensuring the independence of the energy system from regulation by the energy systems of neighboring states.

“Kazakhstan has sufficient potential for the development of nuclear energy. We rank first in the world in terms of natural uranium production. We have our own production of nuclear fuel components, and our country also has access to uranium isotope enrichment services,” Aqchulaqov said at a briefing at the CCS.

For example, last year, on the basis of the Ulba Metallurgical Plant, a plant for the production of finished nuclear fuel for nuclear power plants in China was opened. Active production of nuclear fuel has begun. As for human resources and experience, about 24,000 people work in the nuclear industry and science. Since 2010, about 3,000 personnel have been trained in the universities of Kazakhstan in the areas of nuclear and technical physics.

“And just last week in Russia, between our countries, with the participation of two presidents, memorandums were signed on the training of personnel in this industry in Russian universities, which are among the world's leading. Given the upcoming shortage of electricity, the need to reduce dependence on coal generation in view of the global environmental agenda, the depreciation of production facilities, as well as the huge potential of Kazakhstan in the development of nuclear energy in the country, in our opinion, the construction of a nuclear power plant seems to be the most promising solution,” the speaker concluded.

On Jan. 25, due to a sharp significant decrease in the generation of electricity in the energy system of Central Asia, there was an overload of the 500 kV electrical transit North-East-South of Kazakhstan. According to preliminary information from KEGOC, as a result of a short circuit at the 500 kV switchgear at the Syrdarya TPP in Uzbekistan, 4 power units with a total capacity of 1,000 MW were disconnected from the protection, which led to a sharp decrease in frequency to 47 Hz and the division of the United Energy System of Central Asia.

“In order to prevent damage to electrical networks and the development of a major systemic accident, the electrical transit North-East-South of Kazakhstan was separated through the correct operation of emergency automatics, which prevented the complete repayment of consumers in the southern zone of Kazakhstan. The action of emergency automatics prevented a complete shutdown in the operation of the Zhambyl State District Power Plant, Shymkent Thermal Power Plant-3, Kyzylorda Thermal Power Plant-6 and power plants of the Almaty Region, while maintaining heat and power supply to consumers. With the standard frequency of 50 Hz, there was a sharp decrease in the frequency in the energy system of Central Asia to 47 Hz, as a result of which the energy systems of Uzbekistan and Kyrgyzstan were completely extinguished,” the minister noted.

Thanks to the timely measures taken by the system operator and regional energy organizations, the normal mode of the energy system and power supply to consumers were restored in a short time. As a result of the work of the commission, an assessment was made of the actions of personnel in the event of the occurrence, localization and elimination of a technological violation, the operation of relay protection and emergency automation, and organizational and technical measures were developed to prevent such technological violations in the future.