Electronic public services, digital mortgage, development of IT sector — what Bagdat Mussin spoke about at the government session 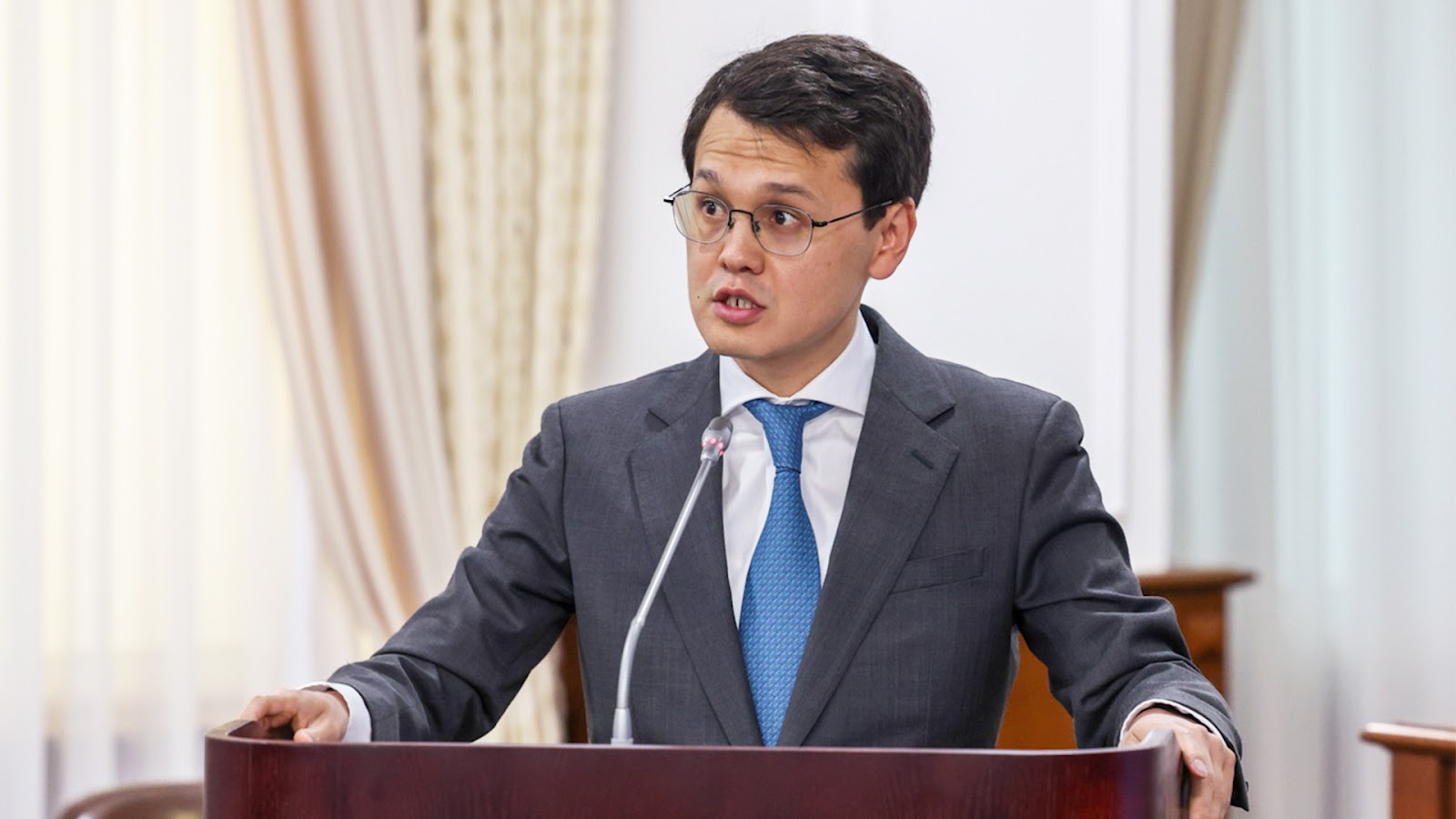 Today, on June 28, a regular government session was held under the chairmanship of Prime Minister Alikhan Smailov. The agenda discussed the issue of digitalization of public services and the development of the IT industry. On this topic, reports were made by the Minister of Digital Development, Innovation and Aerospace Industry Bagdat Mussin, the head and co-founder of Kaspi.kz Mikhail Lomtadze and the Development Director of the Waste Valley IT-Hub Alexander Doroshenko.

According to the Minister Mussin, reforms related to business process reengineering have made it possible to form a new list of public services in the amount of more than 1,300 types of activities.

“Currently, 93% of government services are available online, but some government agencies have yet to improve this work. Based on this new initiative, we are implementing an improved automation metric,” added Bagdat Mussin.

According to statistics, the number of proactive and fully automated services, that is, services created without a human factor, is 6%.

The analysis carried out by the Ministry of Digitalization showed that the majority of public services, that is, the number of services created by the human factor, is about 85%.

During the report, the head of the digital department also touched upon the large-scale work carried out by the Ministry of Labor and Social Protection of the Population to transfer important social services to a proactive format. As the Minister of Digitalization said, these services are very well appreciated among the population.

As the minister noted, today, in general, positive changes are observed in the number of electronic services provided. The demand for digital services in the EGov Mobile application has doubled.

Until the end of this year, the ministry plans to release 20 of the most relevant public services on external platforms. Also solved the problem of illegal registration via SMS. The call center waiting time has been reduced from 5 minutes to 20 seconds.

The head of the department also spoke about the implementation of a new promising project for documenting citizens, proposed without the human factor. According to Mussin, if today it takes an average of 20-30 minutes, then when installing the terminals, the process is reduced to 5-10 minutes.

Within the framework of the Video Public Service Center project, the Ministry, together with government agencies, plans to provide consultations and services to citizens through this method until 2025. As the minister noted, with this approach, 13 services are available, and by the end of the year it will grow to 63.

“We have introduced the possibility of paying fees via QR in public service centers. As a result, over 5 months savings of citizens' funds amounted to 205 million tenge. It is worth noting that all duties should be submitted for payment via QR. In turn, this will not only save citizens' money, but also take another step towards eliminating the shadow economy,” said Digital Development Minister Bagdat Mussin.

Touching upon the issue of creating a digital platform for issuing mortgages, Mussin said that the process of obtaining a mortgage with the participation of banks has been radically revised.

“At the same time, 11,160 orders were issued for the state subsidy for apartments rented out by the family through the banking platform. More than 6 thousand received a positive decision. Pledge registration at the expense of Blockchain technologies can be issued without notaries and public service centers,” the Minister of Digitalization emphasized during the report.

As part of the Decree on debureaucratization, the reporting process will be streamlined. As a result, by the end of the year it is planned to reduce the number of reports by 20%.

As part of the legislative initiative in the industry related to digitalization, amendments were made to 4 Codes and 16 laws, including 100 amendments to the current legislation.

Thanks to the current tax incentives, the number of Astana Hub residents has reached more than 750 participants. Together with Google, the Silkway accelerator program was launched. Kazakhstan has been identified as the main partner for the countries of Central Asia under this program.

According to the Minister of Digital Development, a $20 million Early Venture Financing Fund has been established jointly with the World Bank.

The head of the ministry also reported on the creation of the SIMP platform, which will allow building closer interaction between subsoil users, IT companies, industrial enterprises for digital transformation and the introduction of elements of Industry 4.0.

At the same time, as the minister emphasized, the share of local content in 2021 exceeded 67%, which is a positive indicator after the pandemic. In 2020 it was 44%.

An important part of the development of the IT ecosystem is human capital.

“The Head of State set the task to train at least 100 thousand qualified IT specialists by 2025. According to the results of last year, more than 22,000 IT specialists. 3 IT technoparks have been opened in the regions of the country. In 2021, 7 private innovative IT schools were opened. 4 new schools opened this year. As an alternative education, last year 13 IT schools received 100 vouchers. This year, 3,000 vouchers will be presented,” added Bagdat Mussin.

To improve the quality of IT education in higher educational institutions, the Ministry of Digital Development also carried out the integration of 14 faculties with specialized IT universities.

According to the Ministry, IT exports have doubled over the past two years. Last year, the volume of the IT market amounted to $3.6 billion.

To support domestic companies in foreign markets, presentations were made in 8 foreign countries.

At the same time, a lot of work is underway to relocate foreign IT companies to the country. As Mussin said, there is already a result, work in this direction will be reflected.

“In conclusion of the report, I would like to note that in order to create a digital and client-oriented state, we need to implement a complete ban on re-requesting data, cancel any certificates, based on the key principle that data belongs to citizens or businesses, and not to the state and officials,” summed up Minister of Digital Development, Innovation and Aerospace Industry Bagdat Mussin.

The head and co-founder of Kaspi.kz Mikhail Lomtadze spoke about the development of FinTech and online banking.

According to him, in 2021, more than 7 million Kazakhstanis are users of the State Services section in the Kaspi.kz application. Every third car passes online registration, which amounted to 286 thousand cars for 2021.

“Kaspi.kz has paid 446 billion in taxes. 2 million Kazakhstanis use digital documents. 500,000 social accounts have been opened and 66,000 individual entrepreneurs have been registered,” Lomtadze added.

As the Chairman of the Board of Kaspi noted, as part of the work with entrepreneurs, modern payment terminals were developed especially for them, accepting payments both by cards and via QR.

“We have already provided more than 276,000 payment terminals free of charge to entrepreneurs throughout the country. This created a unique platform for the transition of trading from cash to non-cash. As a result, non-cash trade turnover in Kazakhstan is growing rapidly and in 2021 it already amounted to more than 8.4 trillion, an increase of 85%, which is one of the highest growth rates in the world,” said Mikhail Lomtadze.

Development Director of the Waste Valley IT Hub Alexander Doroshenko made a report on the development of the IT sphere.

As Doroshenko noted, recently there has been an active development of the IT sector in Nur-Sultan and Almaty. This is facilitated by the most comfortable conditions created, among other things, due to the influx of regional personnel. But socio-economic stability for the country is also provided by developed regions, which have a competitive environment, and you can build a successful career or a profitable business while staying in your hometown.

“In Karaganda, we initiated the Terrikon Valley project, the task of which is to increase the number of employees of IT companies in the Karaganda region from the current three to ten thousand people within five years. The project is a private initiative, supported by the regional akimat and Astana Hub. Our group of entrepreneurs invested in the creation of the IT Hub,” Doroshenko said.

IT Hub Development Director also spoke about the main plans for the coming period. Thus, this year the programming school "Terricon school" will participate in the "Tech Orda" program, within which Astana Hub issues vouchers for programming schools to train qualified IT specialists.

According to Doroshenko, in addition to generally accepted projects in the field of Smart City, digitalization of public services, fintech, e-commerce, one should not forget about such a large layer as industrial technology.