During the regular Government session chaired by Prime Minister Alikhan Smailov, the progress of preparations for the heating season 2022-2023 was considered. Reports were made by the Ministers of Energy Bolat Akchulakov, Industry and Infrastructural Development Kairbek Uskenbayev, Akim of North Kazakhstan region Kumar Aksakalov.

As the Minister of Energy informed, in order to ensure the stable functioning of the Unified Electricity System of Kazakhstan continues to prepare energy companies to work in the autumn and winter period.

"In accordance with the schedule approved by the System Operator at power plants completed repair on 4 power units, 25 boilers, 23 turbines. At different stages of repair work are conducted on 4 power units, 27 boilers and 16 turbines," Akchulakov said.

According to the information of local executive bodies to prepare 487 boilers in the zone of district heating for the heating period 1073 boilers or 90% of the plan were repaired.

On the electrical networks were planned to repair power lines with a total length of 20,201 km, as well as 712 units of high-voltage substations.

"As of today, 14,047 km of power lines and 331 substations have been repaired, which is 70% for lines and 46% for substations, respectively, of the annual plan. Repairs of power grids are completed in accordance with the approved schedules," the Minister of Energy said.

At the same time, there is a failure to meet deadlines for repairs of main equipment of power plants in Karaganda, East Kazakhstan regions.

In addition, major repairs were postponed until 2023 in Karaganda, Mangystau regions and Shymkent.

In turn, the Committee of Atomic and Energy Supervision and Control together with regional akimats constantly monitor the preparation of power companies for the upcoming autumn-winter period and take measures to complete repair work at power plants in a timely manner.

According to the Minister, the accumulation of fuel at power plants continues. Coal reserves of power plants amount to 3.9 million tons and 83 thousand tons of fuel oil, which generally meets the approved standards. At the same time, 5 stations do not meet the normative stock of coal.

At the same time, it is noted that at the beginning of the last heating season due to lack of rolling stock there were disruptions of coal supplies to a number of power plants in the country.

Regarding the social fuel oil in the regions, Akchulakov said that in August 2022 the Ministry of Energy approved the Schedule of the regions and cities Nur-Sultan, Almaty and Shymkent, the main resource holders of oil and oil products for fuel oil supply to social and industrial facilities and institutions in the autumn-winter period 2022-2023, in accordance with the requests of local executive bodies in the amount of 218.6 thousand tons.

An important issue is a significant amount of accounts payable of energy producing organizations for fuel. As of today, the debt to KazTransGas-Aymak JSC is 4 billion 959 million tenge.

There is also a debt of energy producing organizations to Bogatyr-Komir LLP in the amount of 2 billion 479 million tenge.

According to the Minister of Energy, the analysis of preparations for the heating season identified a number of regions requiring special attention to the passage of the current heating season.

According to the Roadmap the work on normalization of Petropavlovsk CHP-2 continues, for today overhaul of the main equipment (boilers) is fulfilled by 85%, works on restoration of the main building of the boiler house, and reconstruction of gas ducts with switching of boilers to the remaining two chimneys are conducted.

Preparation of Petropavlovsk CHP-2 is under constant control of the Ministry and the North Kazakhstan region Akimat.

Taking into account the high level of depreciation of main equipment of Kentau CHP-5, Akimat of Turkestan region has to pay attention to timely allocation of funding for capital repairs of CHP and heating networks of Kentau town, as well as to control the issue of timely coal supply.

On the city of Nur-Sultan.

In general, the preparation of energy sources is in accordance with the approved schedule, the implementation is about 80% of the plan.

However, today according to the information of the akimat the deficit of thermal energy is 346 Gcal/hour. To cover the growing deficit it is necessary to accelerate commissioning of the CHP-3.

Unstable operation of the thermal power plant of MAEK-Kazatomprom LLP with frequent emergency shutdowns of power units is noted.

In the past heating season at Stepnogorskaya CHP there is a 78% increase in technological violations compared to the heating season of 2020-2021. Depreciation of heating networks is 81%.

Akchulakov noted that for the stable passage of the autumn-winter period 2022-2023 it is necessary: 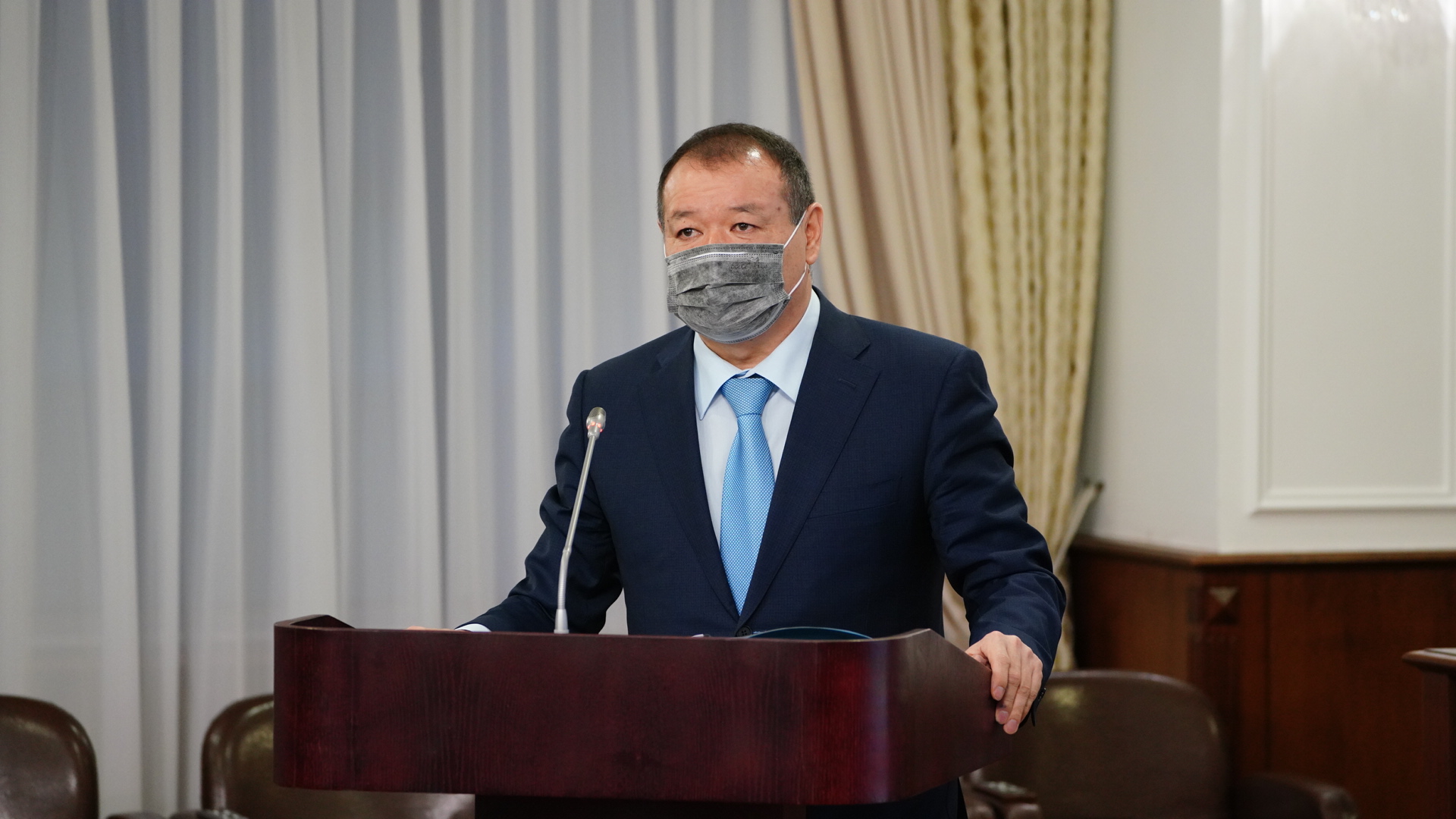 The Minister of Industry and Infrastructural Development Uskenbayev informed that for the purpose of quality and timely preparation for the coming heating season 2022-2023, the department approved the Work Plan, according to which the regional, Nur-Sultan, Almaty and Shymkent akimats had to:

Regarding the preparation of educational facilities.

As of September 1 of planned 11,157 educational objects or 99% of plan were prepared.

Regarding the preparation of healthcare facilities.

Plans call for preparing 5,674 healthcare facilities, of which 5,566, or 98%, are ready today. Compared to other regions the lowest readiness is observed in Nur-Sultan, Akmola and Atyrau region.

Regarding the preparation of residential buildings.

Of the 48,413 residential buildings planned for repair, 42,383, or 88%, have been completed. Low rates of readiness of houses are in Pavlodar and North-Kazakhstan regions.

Regarding the autonomous boilers.

Local executive bodies planned to repair 11,435 autonomous boilers, of which 11,074 boilers or 97% are prepared. Low rates of work compared with other regions are observed in Abay, Karaganda and Zhambyl regions.

Regarding preparation of heating networks.

Regarding preparation of water supply and sanitation networks.

For the current period on the preparation of water supply facilities low rates in Turkestan, Almaty, Akmola regions.

Akimats need to strengthen measures for timely preparation of engineering infrastructure, social facilities and housing for the heating season.

Regarding the preparation of fuel for autonomous boilers.

There is a low percentage of coal procurement in Almaty, Pavlodar, Karaganda regions, fuel oil in Akmola and Aktobe regions.

"Local executive bodies need to take urgent measures for the timely purchase and delivery of fuel for autonomous boilers. The Ministry conducts weekly monitoring on availability of coal for the population and household sector," Uskenbayev emphasized.

According to the preliminary data, coal mining companies produced 66.4 million tons of coal in Jan-July 2022, which is 106% compared to the corresponding period of the last year.

According to operational data for the reporting period coal shipments to the domestic market of the country amounted to:

In the section of large coal companies there is an increase in production at Shubarkol Komir, Vostochny, Maikuben West and Karazhira mines. In general, all regions have accumulated sufficient coal reserves. The fleet of railway transport provides coal transportation in full volume.

Based on the data of the akimats, the Ministry formed a plan of coal consumption for public utilities and the population for the period 2022-2023.

"As of September 3, 2022, the availability of coal reserves in relation to the plan of needs is: the domestic sector is 49.9%, the population was 30.9%. The mines have coal in sufficient quantities, coal production is carried out as planned, the price of coal in the section remains at last year's level," Uskenbayev informed.

For the success of the heating season, the following additional measures are taken:

As of September this year, arrears of consumers for utility services amounted to 13.8 billion tenge.

The largest accounts receivable are in:

In order to prepare for the upcoming heating season in a timely manner, the akimats should:

According to the Akim of North Kazakhstan region Kumar Aksakalov, the region continues to prepare for the upcoming heating season.

"The priority is the readiness of Petropavlovsk CHP-2. The works are conducted according to the road map. Ten contractors, 395 people and 35 units of equipment are involved. More than 17 billion tenge was sent from the shareholders' own funds to repair-rehabilitation works, 12.5 billion tenge remain this year," Kumar Aksakalov said in the course of the report.

According to the akim, repair works covered 4 boiler units and 1 turbine unit. Dismantling of chimney №1 is being continued, specialists completed the repair of chimney №2. There are no problems with material supply.

"In general, the educational, health and cultural facilities are fully prepared. Preparation of boiler rooms and multi-storey residential buildings is coming to an end. More than 5 km of heating networks, 4.6 km of water supply and water disposal networks and 1,300 km of electric networks are overhauled," the Head of North Kazakhstan region said in the course of the report.

As noted the akim of the region, for budgetary institutions supplied 125 thousand tons or 89% of coal. The population stocked 170 thousand tons of coal or 40%.

"Preparation for the autumn-winter period is under constant control," Kumar Aksakalov summarized.