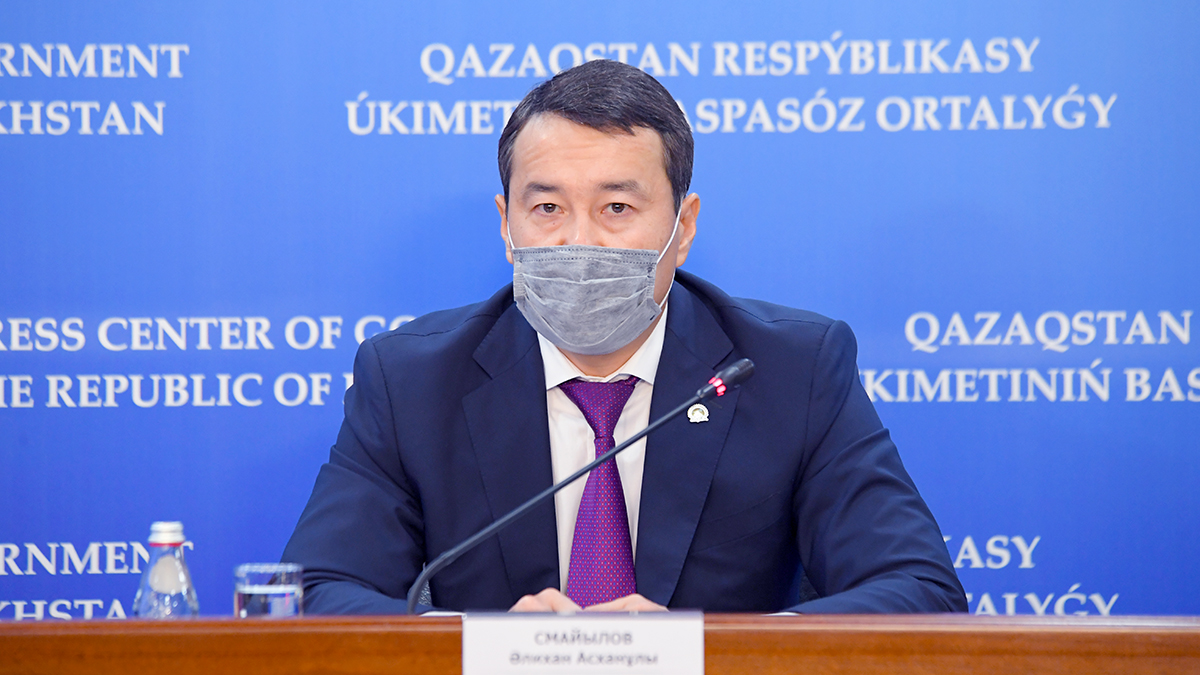 First Deputy Prime Minister Alikhan Smailov, during a briefing at the government's press center, spoke about the measures to implement the instructions of the Head of State, voiced in the Address to the people on Sep. 1, 2020.

In his Address, the Head of State Kassym-Jomart Tokayev outlined specific measures aimed at stabilizing the economy and sustainable development of the country in the new conditions.

As the President said, the main task facing us in today's difficult situation is the preservation of socio-economic stability, jobs and incomes of the population.

For the quality fulfillment of this task, the work of the financial and economic block of the Government will be carried out in the following main directions.

On development of entrepreneurship

As part of the new direction of the state program Business Road Map-2025 in order to provide additional assistance to small and medium-sized businesses, in accordance with the instructions of the Head of State, interest rates will be subsidized on existing loans to SMEs, bringing up to 6% per annum for the end borrower. The subsidy will cover a period of 12 months from the moment of the announcement of the state of emergency.

“This carries a great burden on this business, especially in the context of the introduction of restrictive measures against their activities. In the course of meetings with business, the business itself raised this issue of reducing interest rates on loans as one of the key ones. Therefore, the Head of State decided to provide an additional measure to support subsidies to all SMEs in the affected sectors on their loans up to 6% per annum within 12 months from the beginning of the announcement of the state of emergency, that is, from March 16, 2020 to March 16, 2021,’’ said the first deputy prime minister.

A set of measures will be taken to further improve the business climate. This includes automating risk management systems, reviewing all regulatory requirements and reducing them. Currently, measures are being prepared to introduce the institution of regulatory appeal with its consolidation in the Entrepreneurial Code.

SMEs will be exempted from paying rent payments for republican and municipal property until the end of this year. Similar measures will be taken for the objects of the quasi-public sector.

SMEs in the affected areas will be exempted from payroll contributions to the pension fund, social insurance fund and health insurance fund until the end of this year.

An export acceleration program will be launched aimed at medium-sized non-resource enterprises.

An additional 200 billion tenge will be allocated to support entrepreneurship, bringing the volume of lending to working capital at a preferential rate to 800 billion tenge and extending this program until the end of 2021.

“All of the above measures will help achieve the goals of increasing the share of SMEs in GDP to 35% and the number of people employed in SMEs to 4 million people by 2025,” said the First Deputy Prime Minister.

In order to ensure legislative stability for the entire period of implementation of investment projects, Strategic Investment Agreements will be introduced.

Amendments will be made to the Entrepreneurial and Tax Codes, as well as to the Law on Special Economic Zones. A pool of investment projects will be formed, for which it is possible to conclude strategic agreements with investors. An individual approach to each major investor will be provided.

In the process of implementing investment projects, the potential of the AIFC will be actively used, which provides modern infrastructure, English law and preferential tax and migration regimes. The volume of investments in fixed assets will be brought to 30% of GDP by 2025.

To expand the volume of the private sector in the economy, a new privatization plan will be adopted until 2025.

In order to simplify the fulfillment of tax obligations and minimize the number of taxes and payments, a complete revision of the Tax legislation will be carried out. This work has already begun.

For SMEs in the most affected sectors, the right to pay retail sales tax will be introduced.

“To diversify the economy and replenish the budget, the possibilities of differentiating tax rates will be considered. Special attention of the government will be paid to the development of a new budget policy,” Smailov said.

A set of key budget coefficients and rules will be developed, an assessment of the effectiveness and sustainability of budgetary policy.

With the introduction of the "extended budget", it is planned to introduce a Comprehensive Assessment of Public Finance by including extra-budgetary funds in the consolidated budget.

As a result, new approaches to budget planning will ensure a more complete implementation of national priorities in the state planning system.

In pursuance of the President's instructions, the Plan to counter the shadow economy will be updated. The legislation will be improved in terms of money transfers to offshore jurisdictions.

By the end of this year, it is planned to carry out the first exchange of information on the financial accounts of individuals and legal entities between the tax authorities of the OECD countries. Accordingly, an analysis of the information received on the residents of our country will be carried out. The work on digitalization of tax and customs administration will also be intensified and continued. From October 1 of this year, marking of tobacco products is introduced.

The list of goods subject to labeling will be constantly expanding, this will significantly reduce the shadow turnover in the economy, especially in trade.

To date, a draft law "On procurement of individual subjects of the quasi-public sector" has been developed. Its adoption and transfer of all procedures to an electronic format will increase the transparency and openness of procurement (electronic contracts, acts of execution and appeal, etc.).

Also, at the NCE Atameken, a portal "Single window for purchases" was created on the basis of various existing purchasing sites.

The government is already implementing comprehensive measures to reduce the level of the shadow economy in accordance with the adopted Plan, which provides for measures aimed at: automation and digitalization of tax and customs administration; development of cashless payments; anti-money laundering; improvement of legislation.

So, within the framework of digitalization of tax and customs administration, the National System of Traceability of Goods, which is a complex of information systems, was created.

“All this helps to increase budget revenues and reduce shadow turnover in the economy. At the end of last year, the budget received 1.5 trillion tenge more income than in the previous year. Of these, 920 billion tenge — only due to the improvement of tax and customs administration and digitalization in this area,” Smailov said.

New approaches to balanced regional development of the country will be developed, including measures to reveal the competitive advantages of each specific region. For this, appropriate changes will be made to the Forecast Scheme of Spatial Development until 2030.

The implementation of the project "Aul - El Besigі", which is aimed at solving urgent infrastructure issues in villages, will continue.

As part of the improvement of local self-government and the development of "public participation budgets", the financial capabilities of the budgets of rural districts will be expanded (transfer of 4 types of taxes and payments).

A new concept for the development of local self-government will be developed. Within the framework of this Concept, proposals will be developed for the introduction of direct elections of rural akims, the expansion of property rights of local government and the powers of maslikhats.

“The Address of the Head of State defines specific development priorities for the country. The set tasks will be fully and timely implemented,” Smailov said.

How much money will be needed to fulfill President's instructions?

Smailov also commented on the financing of the instructions of the Head of State.

“A number of instructions of the President, which were announced in the Address, require appropriate financial support. Certain funds have already been provided for in the republican budget of the current year. For example, 30 billion tenge is provided for the creation of 13 new infectious diseases quickly erected hospitals. 70 billion tenge has already been allocated for the purchase of computer equipment for children from socially vulnerable families from the Government's reserve,” Smailov said.

Currently, work is underway to provide additional costs for the current year as part of the 2020 budget revision. In particular, for such expenses as additional allowances for medical workers, procurement of medicines and others.

“According to preliminary estimates, the additional demand this year will be about 300 billion tenge. And in the 2021 budget, 1.6 trillion tenge is already provided for the implementation of the President's instructions from the Address. First of all, these are expenses such as increasing the salaries of medical workers, teachers, subsidizing interest rates on loans to SMEs, spending on the construction and reconstruction of roads of republican significance, for the program ‘Aul - El Besigi,’’ Smailov said.

On separate instructions, together with state bodies, costs are currently being specified. The source of expenses for these additional costs will be the optimization of the expenditure side of our budget, additional income from work to reduce the shadow economy, expanding the tax base, budget revenues through the development of the economy and entrepreneurship, and private investment.

The First Deputy Prime Minister A. Smailov told about the new Agency what the new Agency for Strategic Planning and Reforms will do. According to him, part of the functions of the Ministry of National Economy will be transferred to the new department.

“The Agency for Strategic Planning and Reforms to be created under the President will be due to the redistribution of functions, that is, the transfer of certain functions from the Ministry of National Economy. In particular, these are functions on strategic planning, certain issues on public administration and issues on the development of state statistics,” Smailov informed.

Funding for the activities of this Agency will be due to the reallocation of existing costs for the performance of these functions. A dividing balance will be drawn up, which will be taken into account when clarifying the budget for the current year and forming the republican budget for the next three years within the framework of the bills that are now in the Majilis.