Review of Government session: Cabinet decisions and comments by ministers on the sidelines 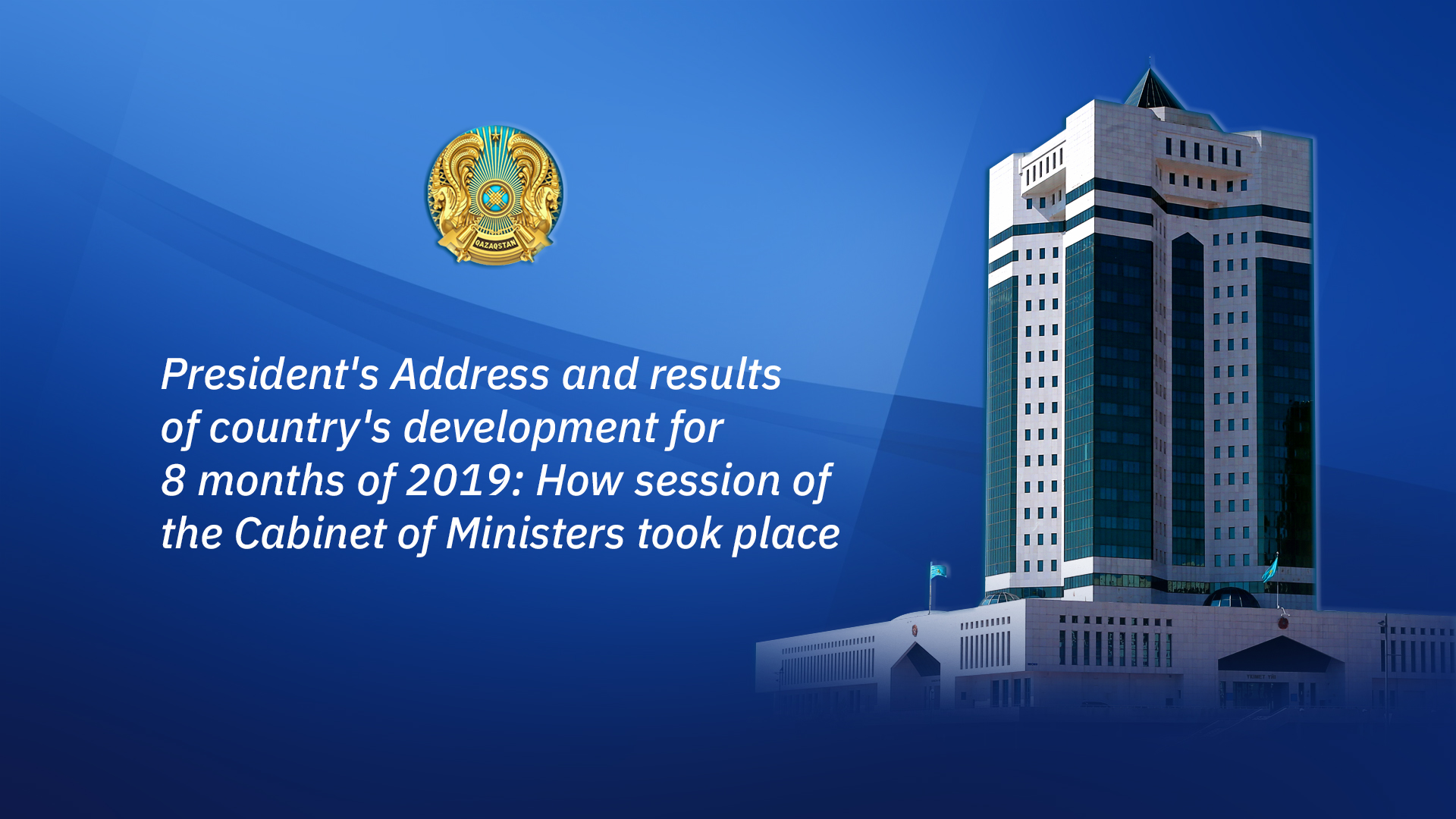 At the Government session held Sep. 10, 2019, a draft National Plan of measures for the implementation of the President’s Address “Constructive Public Dialogue – the Basis of Stability and Prosperity of Kazakhstan” was adopted, the results of the country's socio-economic development and implementation of the republican budget for 8 months of 2019 were also considered. On the sidelines of the Government, media representatives received answers to pressing questions on topics of interest to the current agenda.

The Government adopted the Draft Nationwide Action Plan for the implementation of the Address of the Head of State of Sep. 2, 2019, which consists of 81 events in 5 directions. The document will be submitted for approval by the Head of State.

The Prime Minister Askar Mamin instructed all state bodies and akimats to immediately proceed with the implementation of the National Plan after its approval by the Head of State, emphasizing that a concrete result is expected from the Government.

During the consideration of the second issue, the Head of Government was informed that in January-August 2019, GDP growth amounted to 4.3%. Positive growth dynamics are observed in a number of directions. Askar Mamin emphasized that the main task of the Government is to ensure annual sustainable GDP growth, instructing to rectify the situation as soon as possible with a decrease in indicators for construction, investment, industry, agriculture and housing commissioning in some regions.

“Last week, the Head of State announced a message to the people of Kazakhstan, which reflects the continuity of the policy of Elbasy and sets a number of basic tasks for the Government aimed at further development of the economy. The main task for the Government is to ensure annual sustainable GDP growth and bring it to 5% and higher by 2025,” said Mamin, noting that line ministries need to intensify work to achieve the established target indicators.

On the sidelines of the Government, the Minister of Education and Science Askhat Aimagambetov commented on the issue of heavy school backpacks and forced washing of floors by schoolchildren.

According to him, the problem of heavy school backpacks has not yet been resolved, but now this process is being actively discussed.

“This is a process, this is the goal we are striving for and we are conducting this work. Now we are additionally asking local executive bodies, including in the budget for next year, to provide funds for lockers for schoolchildren. This is a very important issue,” said the minister of education and science.

Regarding the question raised on forced floor cleaning by schoolchildren Aimagambetov noted that there is no such issue on the agenda of the Ministry of Education and Science. In Kazakhstan, forced labor can only be carried out by decision of the relevant authorities.

“The budgets of schools provide for the appropriate funds and staff for administrative and technical personnel. Such work is permitted only at the initiative of the students themselves and with the permission of the parents. School and family should engage in familiarization with work, so this work is being carried out and implemented in schools through various activities. These are simple things that need to be introduced and raised in children from infancy. This is an important issue. We generally believe that a very important issue has been raised, but this should not turn into campaigning. Thic should be the initiative of parents and children,” said the minister.

“The Head of State in his Address gave the order to exempt all enterprises, micro and small business entities from income tax. Microbusiness is individual entrepreneurs, legal entities where up to 15 people are employed, annual income of up to 30 thousand MCI or about 76 million tenge per year. Small businesses include organizations with a staff of up to 100 people and an approximate marginal annual income of up to 300 thousand MCI. These organizations and individual organizations will be exempted from income tax: these are IIT and CIT,” Smailov explained.

According to him, as a whole last year, about 190 billion tenge were received from the micro and small businesses in the form of income tax to the budget. In 2020, with the release of entrepreneurs, the budget loss will be more than 200 billion tenge. It is planned to recover these losses by improving tax and customs administration.

The Minister of Labor and Social Protection of the Population Birzhan Nurymbetov commented on the issue of early withdrawal of pension savings. According to him, today about 10 trillion tenge are in the Unified National Pension Fund. They were accumulated by about 10 million people.

“People had a desire to use pension savings today, and not when they reach retirement age. This is understandable, therefore, I believe that this is the president’s response. He instructed the Government and the National Bank to develop a mechanism by the end of the year. There is a desire of the population, therefore, an order was given,” Nurymbetov said.

According to him, on average this is obtained at 1 million per person. However, it is necessary to calculate all the risks, since pension savings are, first of all, savings for future old age.

“Taking them and not leaving anything for retirement is wrong. There are various options, we will conduct current calculations,” said the minister.

Nurymbetov also emphasized that the question now is the sufficiency of these accumulations for their removal.

“There is a concept of sufficiency when our pension savings are enough to receive at least the minimum amount for the rest of our lives — for men about 11 million tenge, for women — 13 million tenge. We will consider various options so that people with lower incomes can use this service,” explained the speaker.