Comprehensive work is underway in the regions of Kazakhstan to improve the well-being of citizens. Government pays special attention to the quality of life and modernization in the main sectors of the economy. Read the review by PremeMinister.kz about the work done to ensure the socio-economic development of Karaganda region.

Karaganda region is the largest in terms of its territory and industrial potential, rich in minerals and raw materials. The area of ​​the region is 428 thousand km2. The region occupies the most elevated part of the Kazakh Upland — Saryarka.

The population is 1,378.9 thousand people, of which urban is 79.6%. The region consists of nine cities of regional significance, two cities of district significance (Abai, Karkaralinsk) and nine districts.

Industry: About 700 jobs created as part of Industrialization Map

In the structure of the gross regional product, the predominant share is lies on the industry — 45.44%. Among the basic sectors of the economy are electric power, fuel, ferrous metallurgy, mechanical engineering, chemical industry. The share of the processing industry in the total volume of the regional GRP is 31.09%, the mining industry 10.17%, electricity, gas, steam and air conditioning supply 3.34%, water supply, sewerage system, control over the collection and distribution of waste 0.84%. 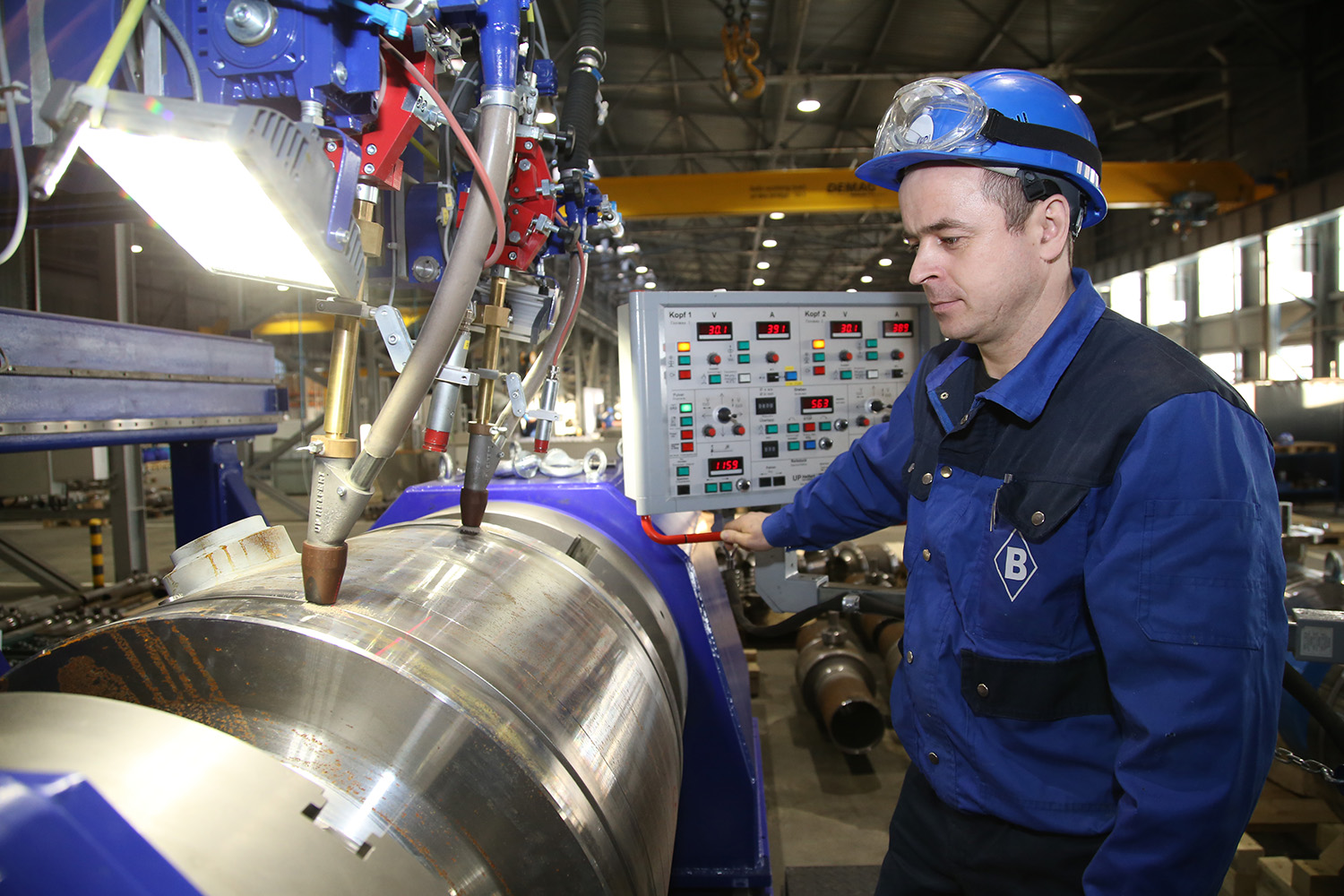 The industrial policy and base of the region is formed by more than 200 enterprises and industries of the mining, manufacturing, power supply and water supply. 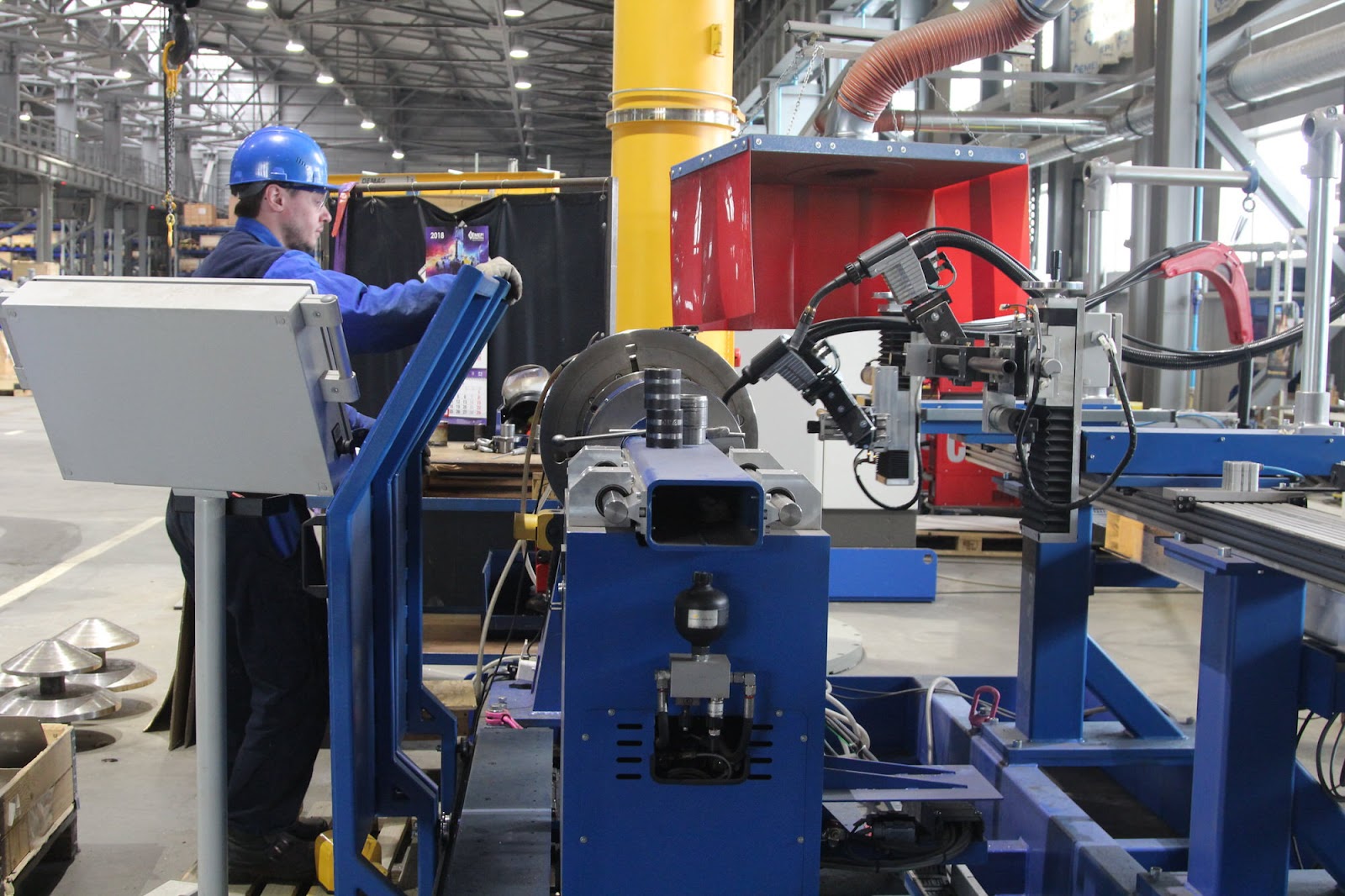 At the same time, the industry has maintained a positive trend in production: 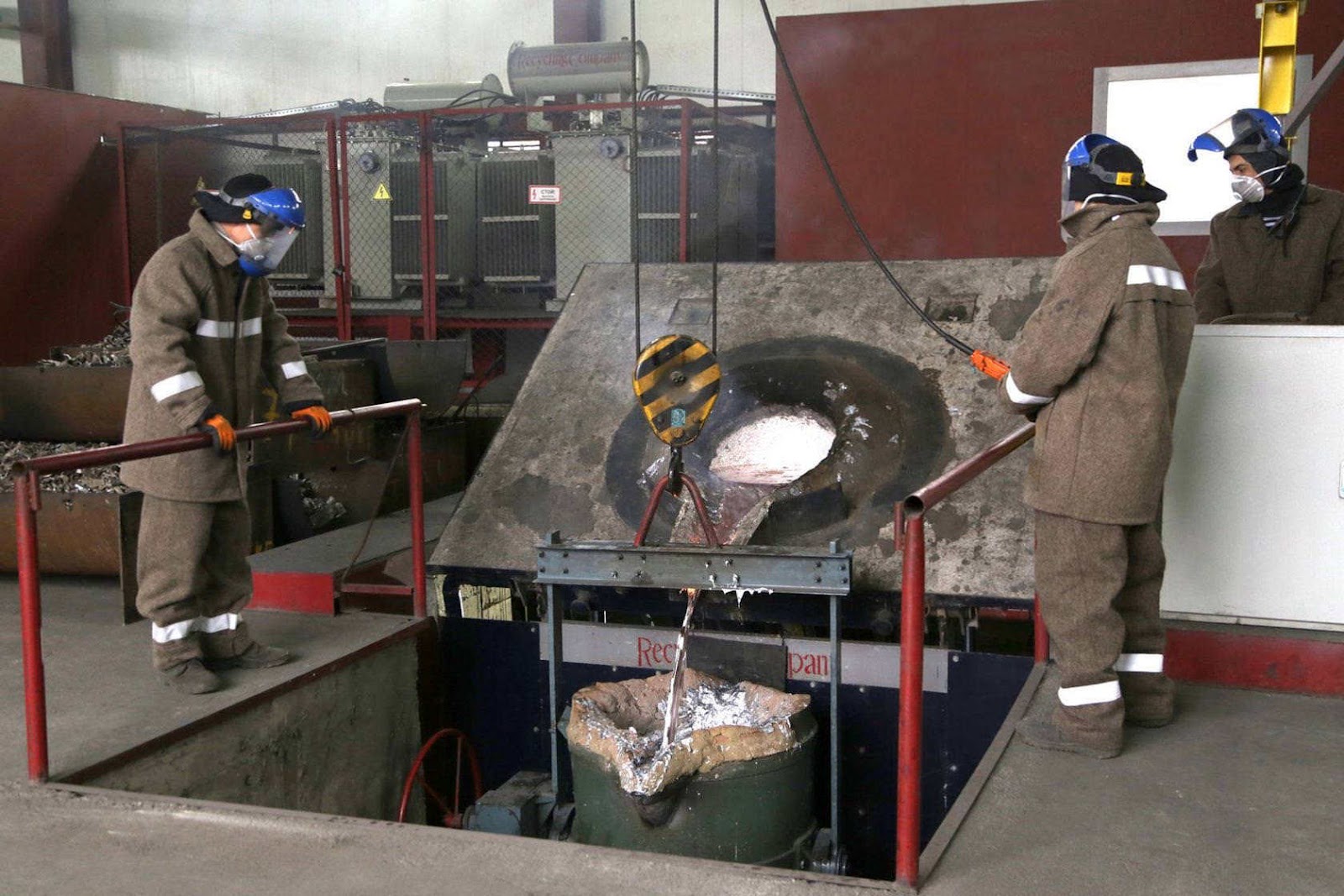 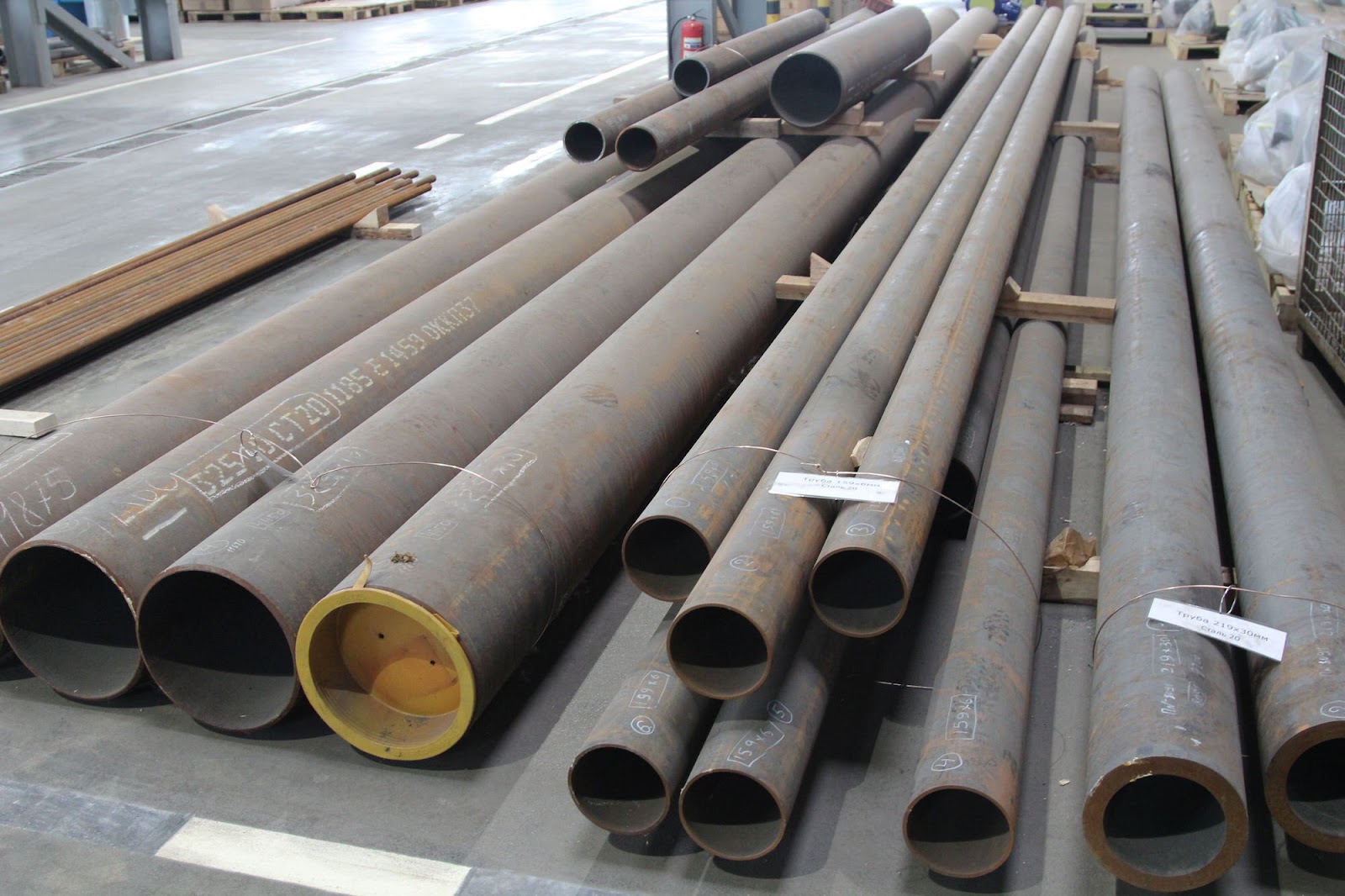 Among those launched in 2018, there are three projects totaling 39.9 billion tenge, with the creation of 489 new jobs: 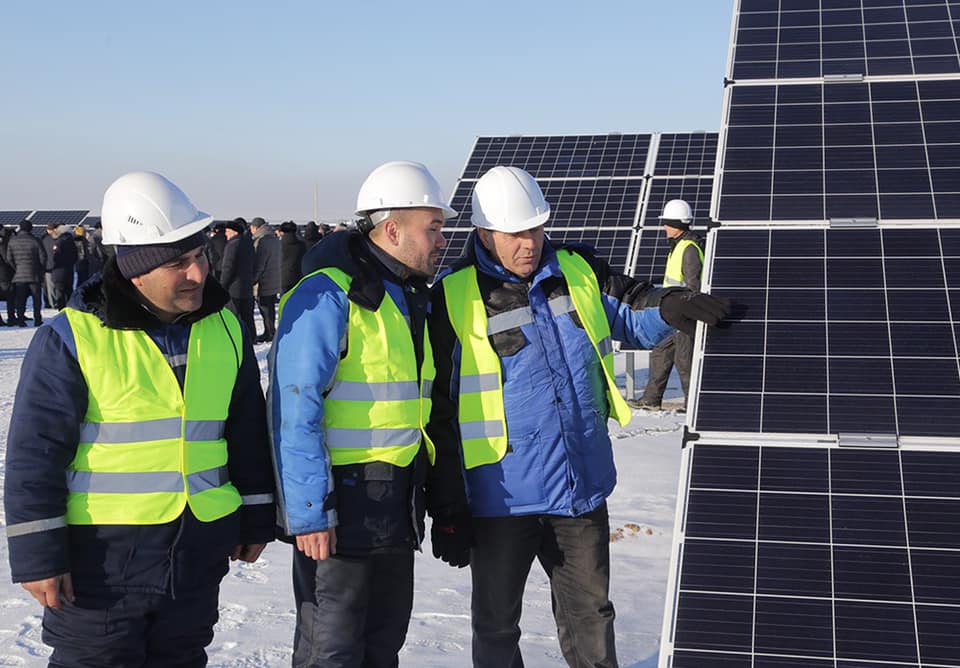 In general, the implementation of the Industrialization Map projects allowed the creation of new types of products in engineering, pharmaceuticals, construction industry and the agro-industrial sector.

The climatic conditions and geographical location of the region, optimal for the cultivation of grain, potatoes and vegetables, and the development of animal husbandry, have determined for the Karaganda region the role of one of the leading regions of Kazakhstan in the production and processing of agricultural products. The situation in the agro-industrial complex of the region is characterized by the growth of production efficiency, the development of the financial services market in the countryside. In addition, the development of this industry led to the improvement in the quality of life of the rural population. 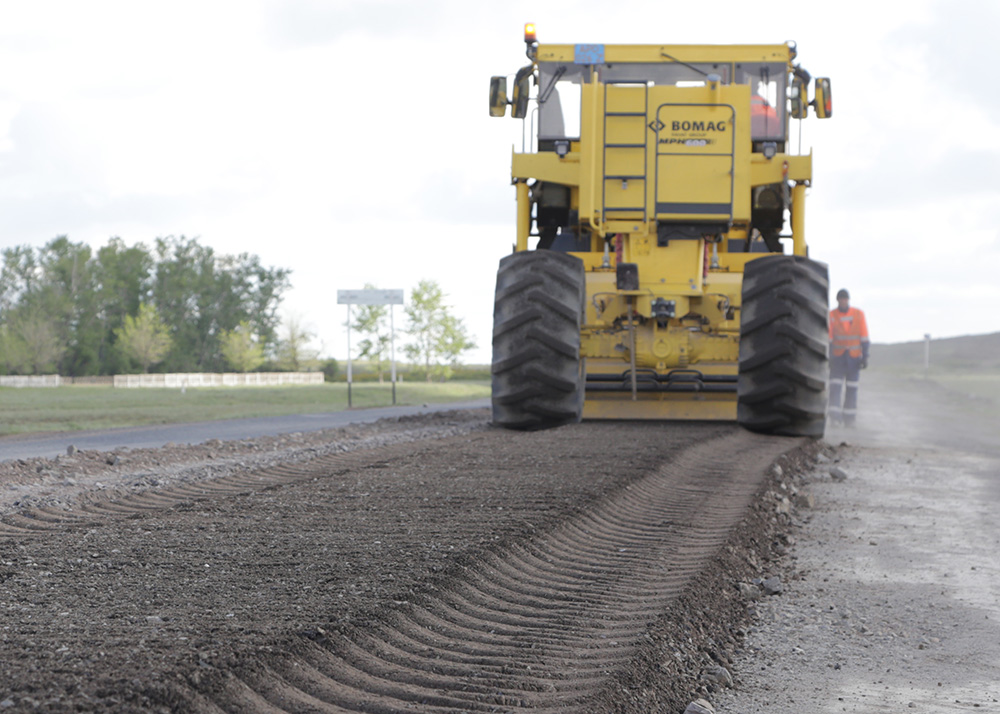 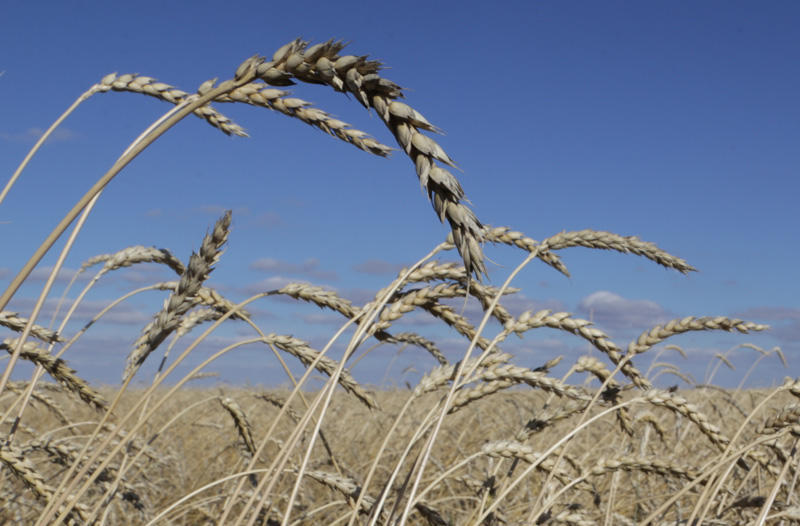 In 2019, in order to simplify the provision of public services, the agro-industrial complex is being digitalized and precision farming systems are being introduced, electronic field maps are being created on the Ministry of Agriculture web portal.

In January-December 2018, food production in the region increased by 2.9%, the production amounted to 112 billion tenge. 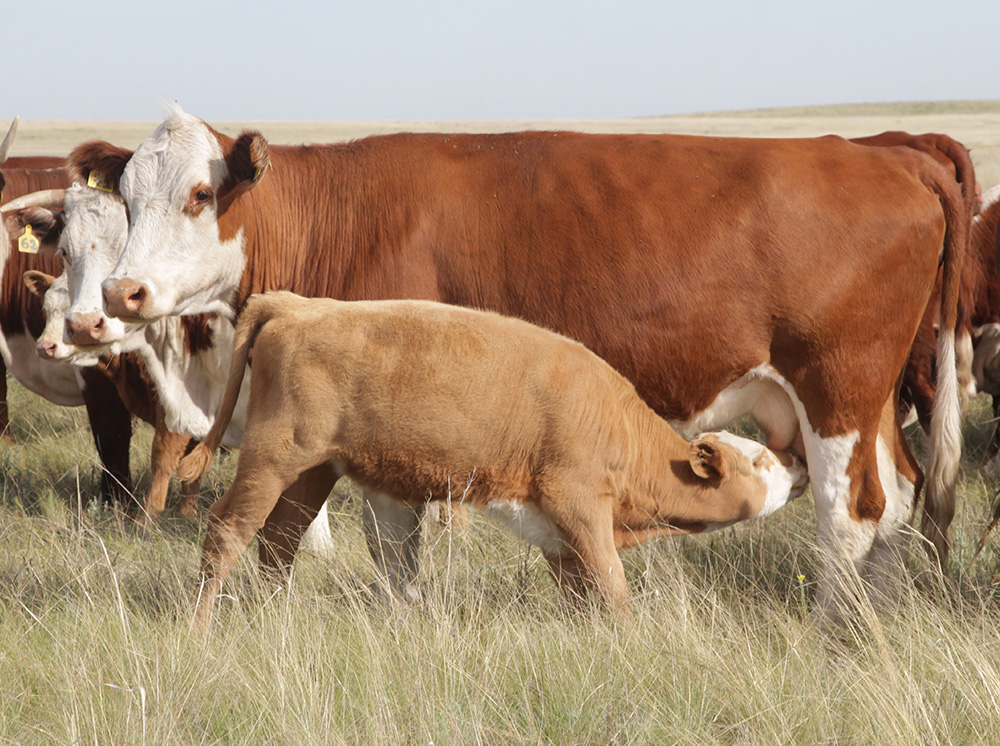 The number of operating entities in small and medium enterprises for January-December 2018 amounted to 84 thousand, an increase of 6% over the same period in 2017.

For the Business Road Map 2020, the government allocated 2.4 billion tenge. For the development of entrepreneurship in 2018, microcredits were issued to 226 agricultural producers, which is 39 more agricultural formations. 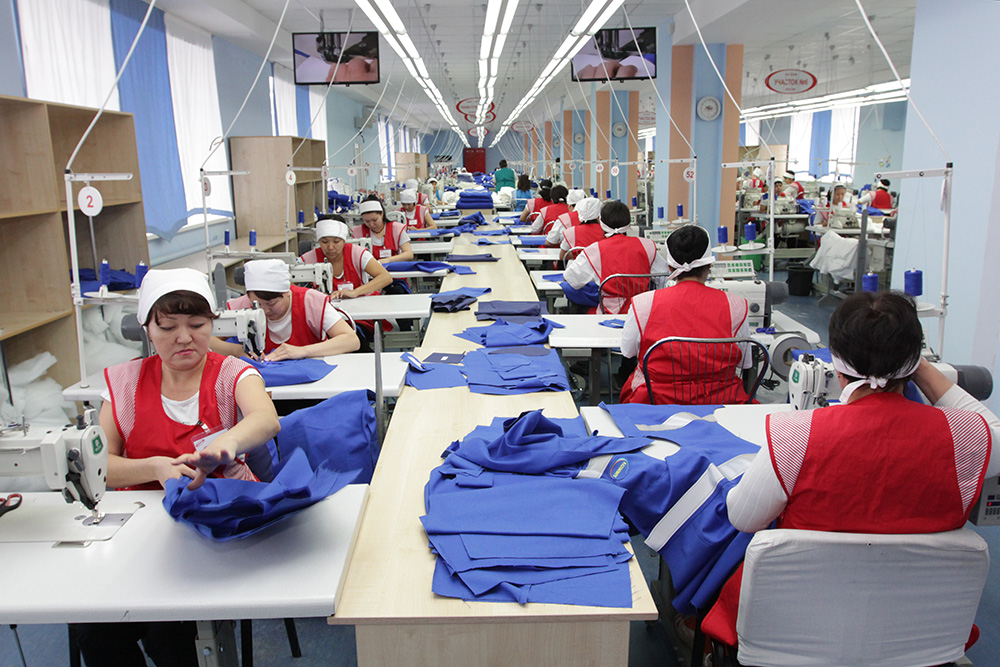 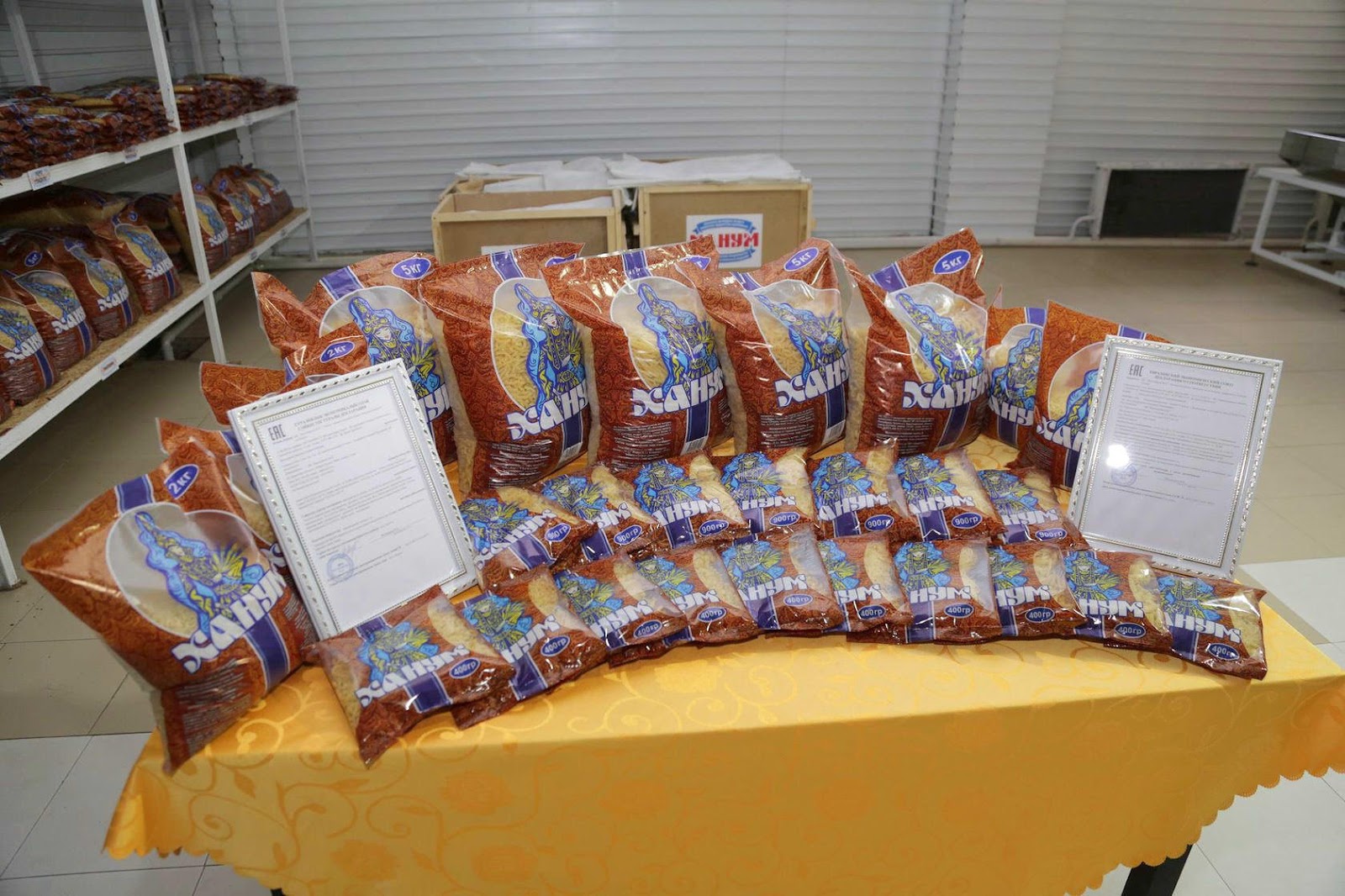 The share of people employed in SMEs in relation to the economically active population of the region is growing annually and today reached 34.3%.

In the sectoral structure of employed in SMEs, wholesale and retail trade accounts for 36.1%, industry accounts for 14.8%, construction accounts for 9.2%, agriculture accounts for 7.4%, transport and warehousing is 5.1%, 4.6 % — real estate operations, 3.6% — professional and research activities, 3.9% — education, healthcare, arts, entertainment and recreation, 3.1% — accommodation and food services, 1.7% — information and communication, 10.5% — other activities.

Over the past three years there has been an increase in the number of SME employees by 5.4 thousand people. The Entrepreneurship Support Map includes 106 projects for 791.9 billion tenge, with the creation of 11,960 new jobs. Of these, three projects are included in the Republican Map — ArcelorMittal Temirtau JSC, Karaganda Plant of Integrated Alloys LLP, YDD Corporation LLP.

All 18 districts are represented in the Business Support Map. As part of the map, 87 projects have been implemented to date, the total amount of investments amounted to 292 billion tenge. The enterprises created 6,903 new jobs.

In 2018, 7.2 billion tenge was allocated for the implementation of the Nurly Zher Program.

2.2 billion tenge was allocated for the construction of rental housing, 424 apartments were commissioned. 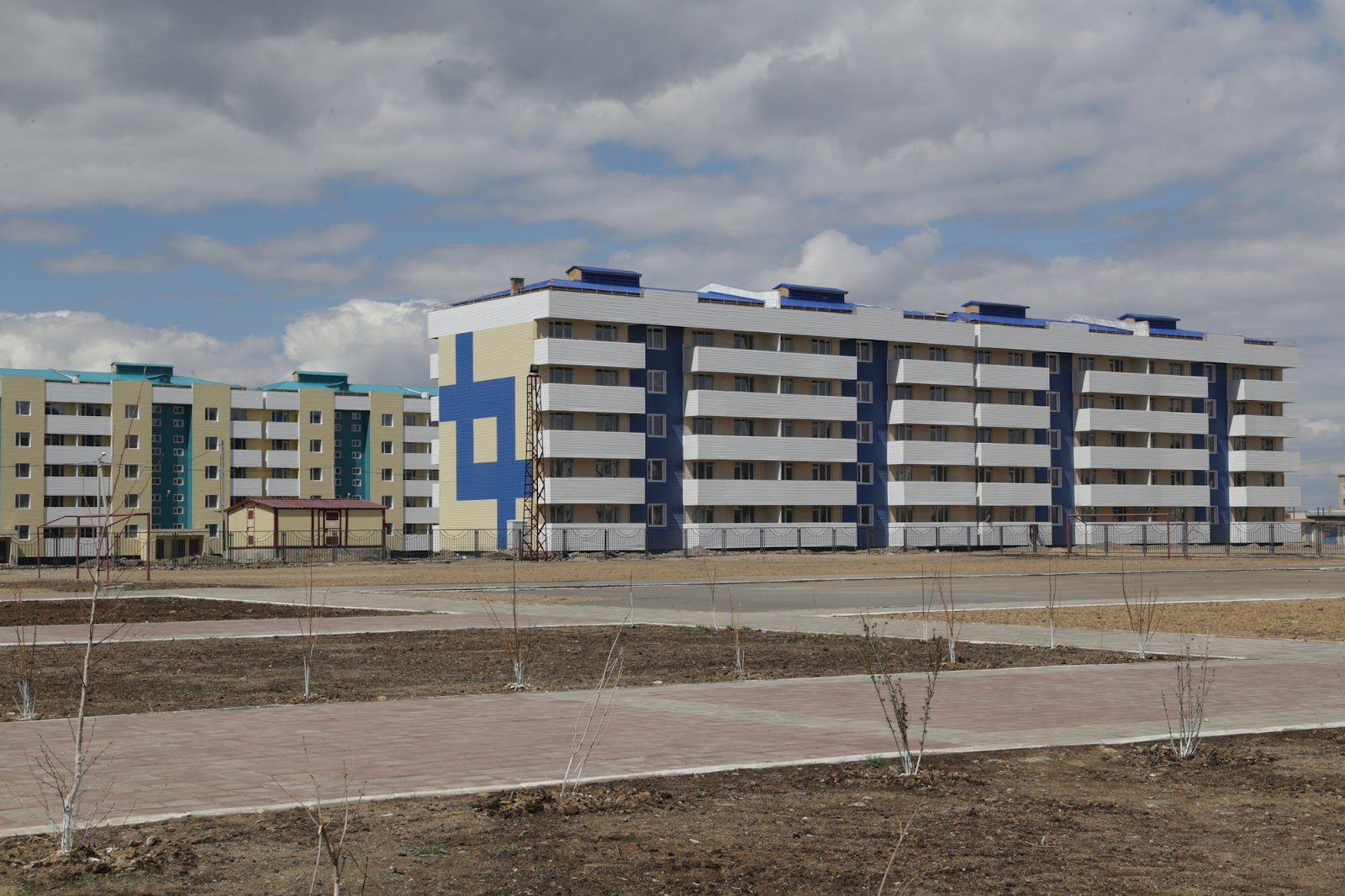 2.9 billion tenge was allocated for lending housing through issuing bonds (at the expense of Baiterek Development JSC) to continue the construction of 10 projects. Following the results of 2018, 549 apartments were commissioned. 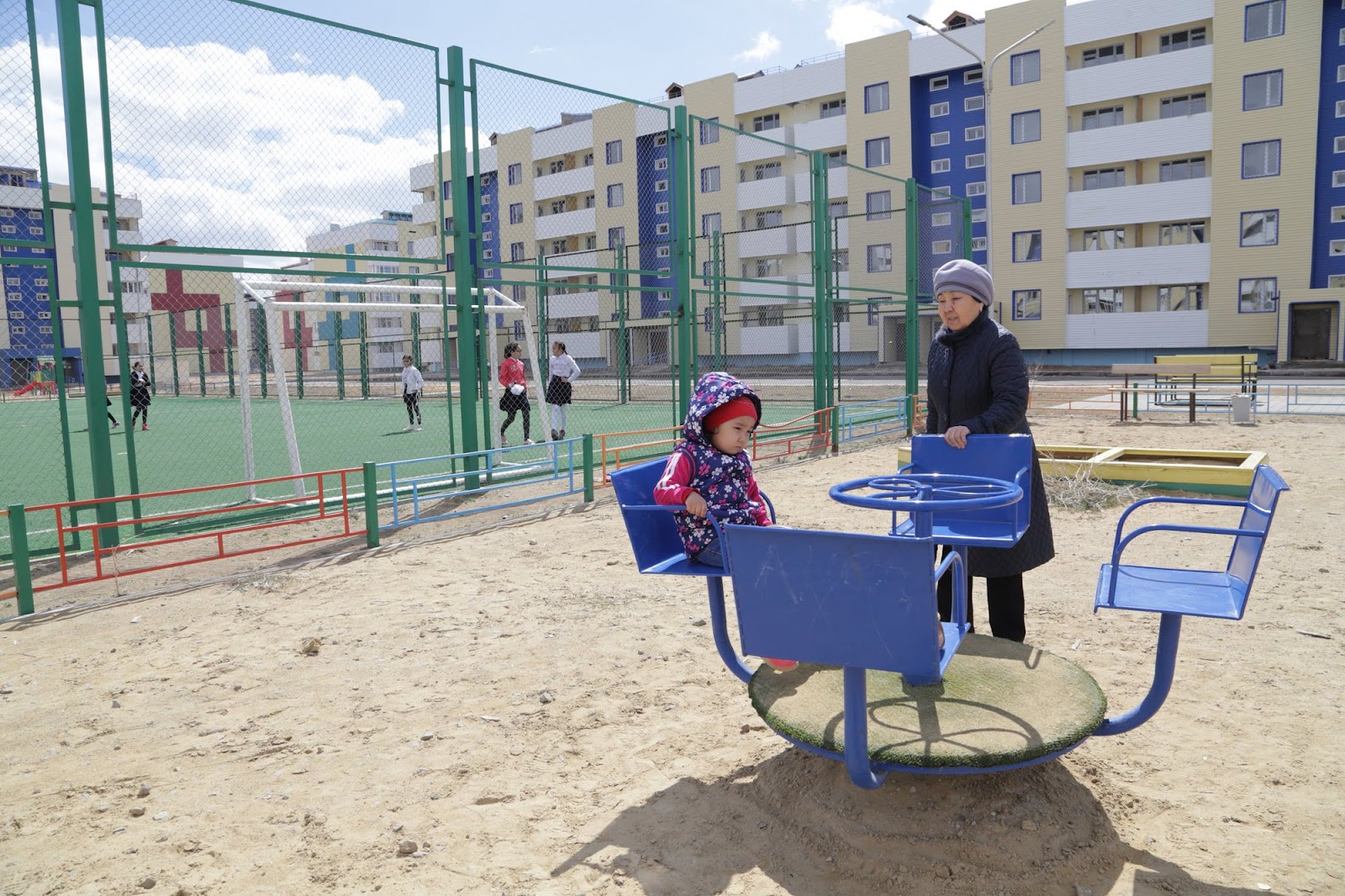 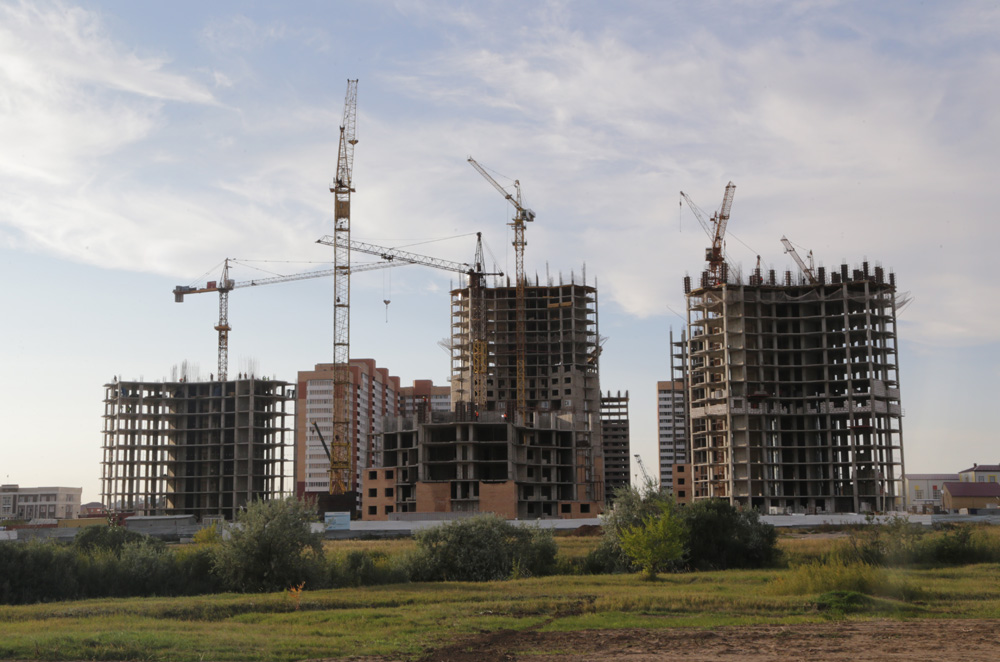 About 18.5 billion tenge was allocated for reconstruction, major and medium repairs, maintenance of local roads.

Improving quality and accessibility of new equipment: Development of education in region

In 2018 to solve the problems of triple shift and liquidate emergency schools in the region, through targeted transfers (with co-financing from the local budget), a school for 464 places was opened in the village of Saryshagan, Aktogay district, two secondary schools for 1,200 places each in Karagandy and a school for 600 places in Temirtau are under construction. 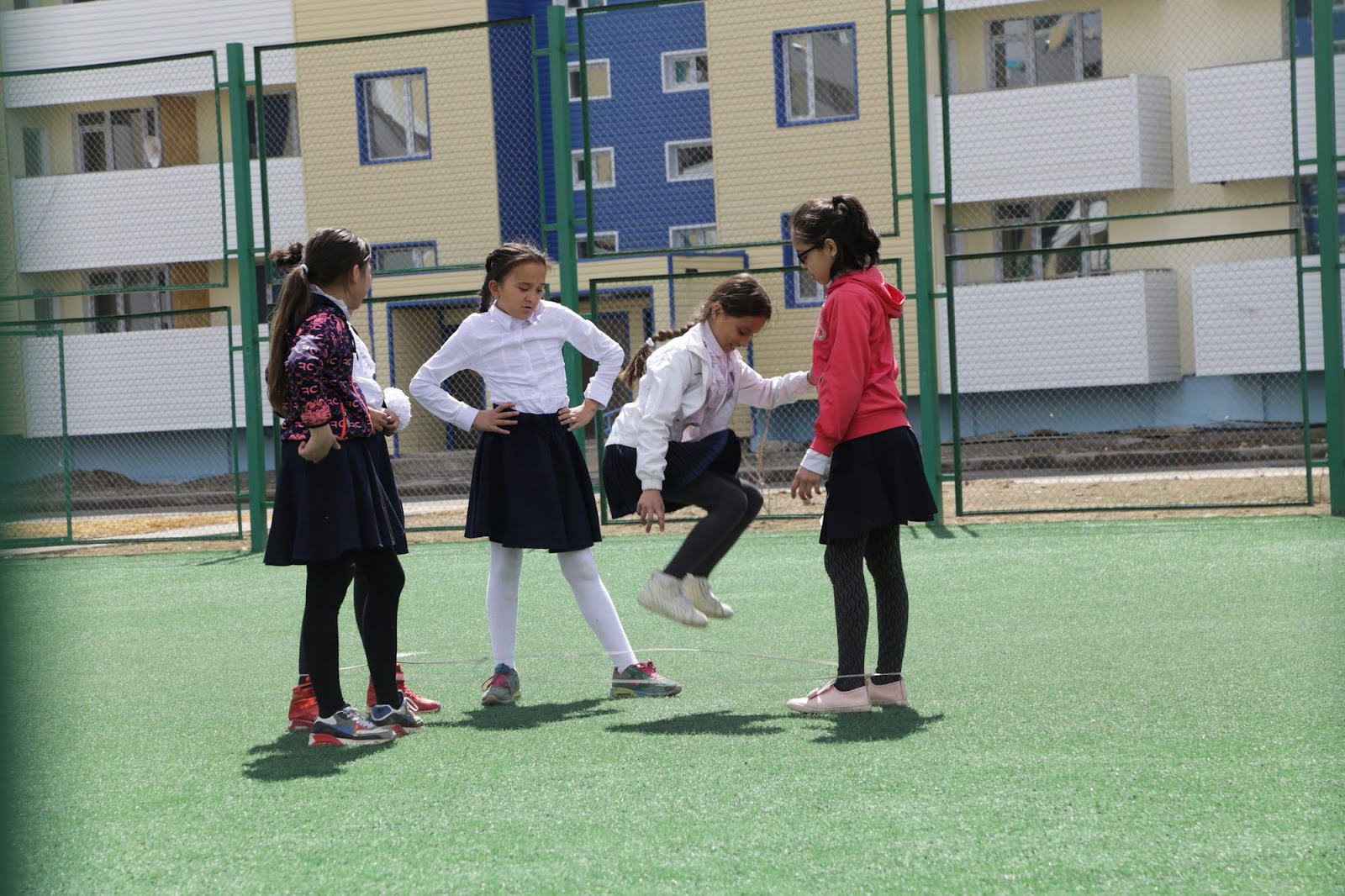 Work is underway to solve new problems. The first is the provision of pre-school education for children with special educational needs. To solve the problem, it is planned to involve business structures. To this end, in Karaganda, the size of the state order for this category of children has been almost doubled. The second task is to increase the coverage of children from 1 to 3 years old. For parents whose children are not yet covered by pre-school education, the Absentee Kindergarten project has been operating in the region for the third year already to provide practical help to parents. On the basis of kindergartens, counseling centers and gaming support centers are open, additional methodists' rates have been introduced in the states. The experience of the Karaganda region received a positive assessment and since 2018 it has been distributed throughout the republic.

In the pre-school institutions of the region, the implementation of the Zerek project has begun, as well as the development of skills in robotic design and programming. In secondary education, work continues on the transition to the updated content.

This school year, new classes were transferred to the 3rd, 6th and 8th grades.

In the two pilot schools of the region, the testing of updated programs and new textbooks for grades 4, 9 and 10 continues.

An important step in the transition to a new quality of education is the transmission of the experience of Nazarbayev Intellectual Schools to all schools. More than 77% of school teachers have already completed course training in new programs.

Much attention is paid to the equipment of schools. To date, 69% of primary and secondary schools are provided with classrooms, and 40% — with robotics laboratories. Until the end of the year, these figures will be increased to 75% and 50%, respectively. In 2018 in cooperation with the regional branch of the Nur Otan party, work began on the creation of IT classes. Seventy-one class has already been created, by the end of the year their number will almost double and amount to 130. All schools in the region have broadband internet access.

All schools have moved to electronic grade book system. Work has begun on the automated receipt of documents and enrollment of children in grade 1 and electronic certification of teaching staff.

As part of the digitalization of education, the introduction of mobile applications Edu-Mark, GradeApp, e-session and e-admission campaign in colleges, e-vocational guidance campaign among students of grades 7-11, PedAtt continues.

Within the framework of the Bilimland project, all schools in the region are connected to digital educational resources.

To improve the quality of education of rural schools in the region, there are 38 supporting schools with coverage of 186 small schools.

In 115 educational institutions, the implementation of the project "Inclusive Kindergarten – school – college" continues.

In order to provide educational services to children with special needs in the region, there are 10 special correctional schools, 8 correction rooms, 1 rehabilitation center.

To improve identifying children with special educational needs, in 2019 it is planned to open psychological, medical and pedagogical consultations in Karaganda, two rehabilitation centers, 2 correction rooms, 3 inclusion support rooms with the assistance of the Bolashak corporate fund.

Seventy organizations of technical and vocational education function in the region, 46 of them are public and 24 are private. Modular educational programs were introduced in all the colleges of the region. Training in these programs will allow students to get 2-3 qualifications instead of one.

Reducing burden on doctors and digitalization of healthcare

All medical organizations work in a single information field on the basis of a regional Integrated Medical Information System. A mobile application DamuMed was developed, which is actively used by more than 367 thousand people, which is 73.4% of the Internet-active population. 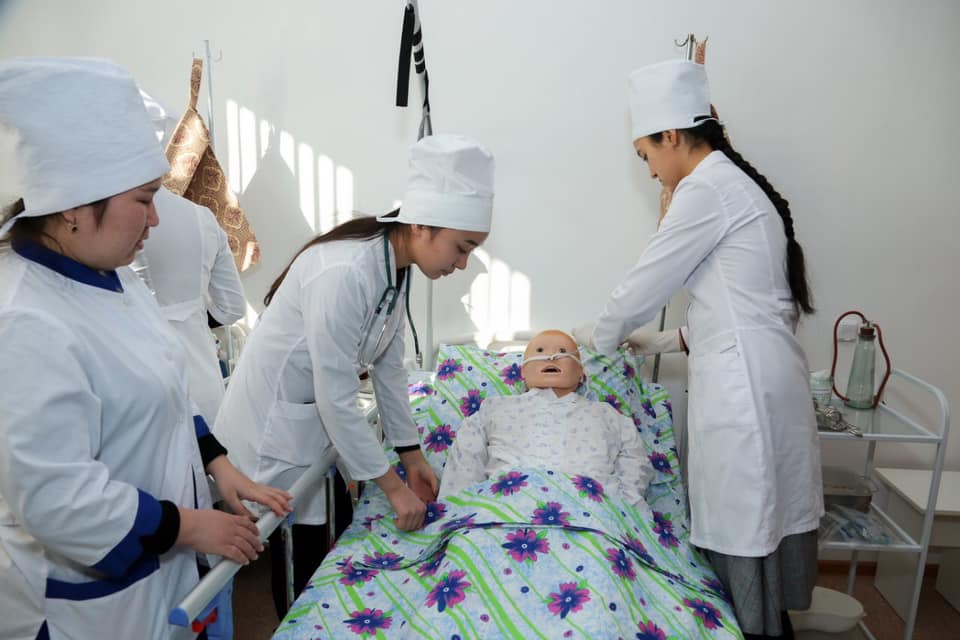 To date, more than 1.3 million electronic health passports have been generated, which is 95% of the population.

The load on one territorial site in polyclinics of the region is 1,741 people, and one general practitioner receives 2,200 people. Work on reducing the burden on the doctor continues.

Four medical organizations were opened in 2018.

In order to disaggregate the clinics and ensure the provision of medical care within walking distance in 2018, two clinics were opened in Karaganda. In 2019, it is planned to open four more polyclinics in Karaganda. In the spring, construction of the polyclinic in Temirtau will be started at the expense of ArcelorMittal Temirtau.

Along with this, a rural medical ambulance station was put into operation in a village. Togusken Zhanaarkinskogo area. The clinic of the Medical University has been opened. 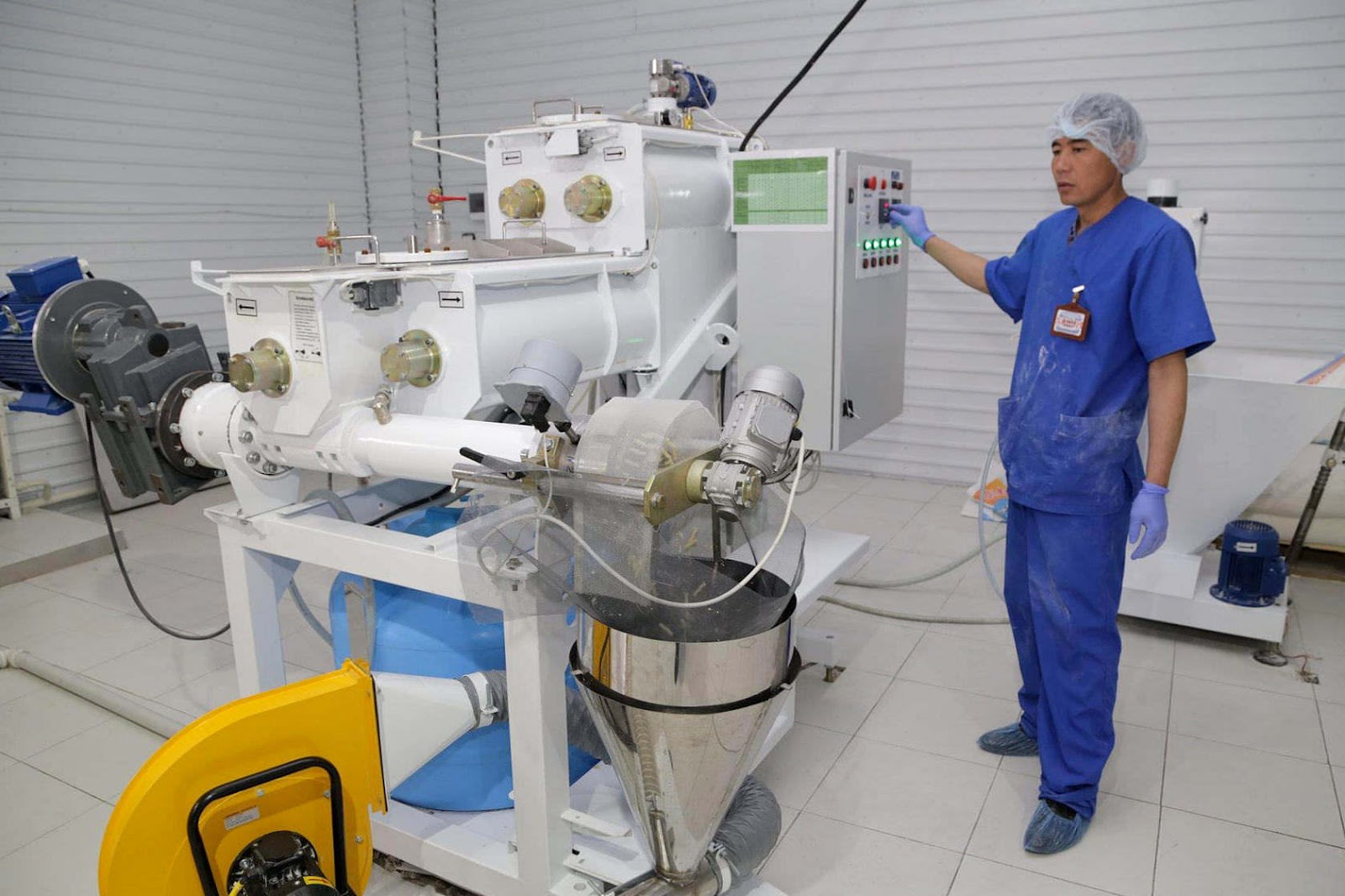 Six contracts for 320 million tenge were concluded within public-private partnership program in 2018.

The dormitory of the medical college for 300 places was restored (it was preserved for many years). In 2019, an additional 2,413 million tenge was allocated from the Republican budget for salary increase for medical workers.