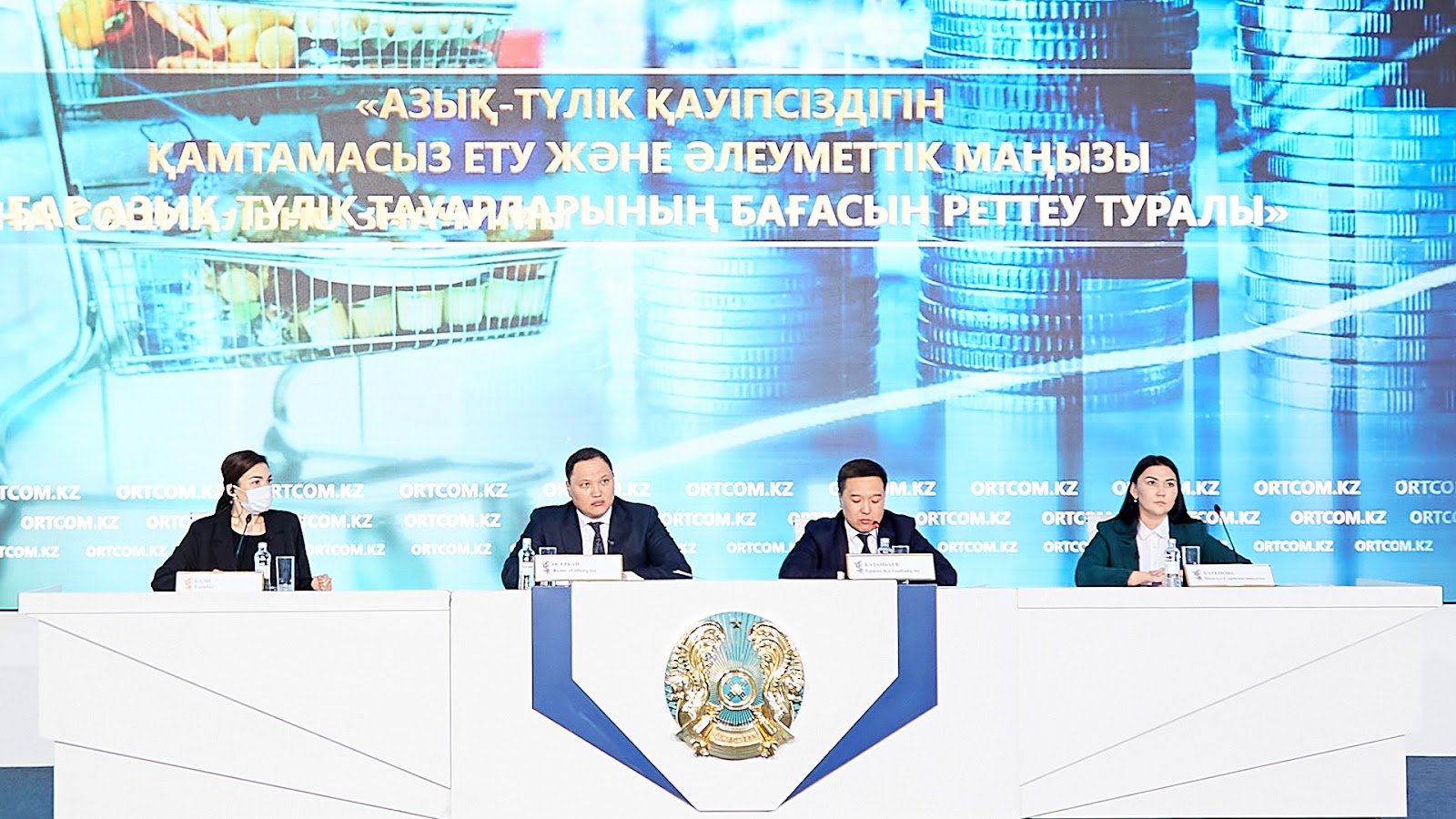 A press conference was held at the site of the Central Communications Service on the topic of ensuring food security and regulating prices for socially important food products. During the press conference, Deputy Minister of Agriculture Zhenis Oserbay and Chair of the Trade Committee of the Ministry of Trade and Integration of the Republic of Kazakhstan Yerzhan Kazanbayev spoke and answered questions from the media.

In his speech, Vice Minister of Agriculture Zhenis Oserbay noted that the department monitors the provision of the domestic market with food products on a weekly basis.

“Practically for all types of foodstuffs, the needs of the population are met through their own production, and for some, production significantly exceeds the need. For example, with the consumption of 1.6 million tons, on average, more than 3 million tons of flour are produced annually. With a need of 95 thousand tons of rice, its production is 200 thousand tons, etc.,” Oserbay noted.

Thus, according to him, while maintaining the current pace of production and consumption, given the volume of consumption and traditional seasonal surges, there are no grounds for a food shortage in the country.

Oserbay also dwelled on the issues of production and supply of grain and flour. According to him, according to official data from the Bureau of National Statistics, as of March 1, 2022, the stocks of grain and leguminous crops in the republic amount to 9.1 million tons.

In recent days, there has been a boom in sugar in the country. On this issue, the vice minister spoke in detail about the reserves, needs and production of this socially significant product. According to him, as of March 14, 2022, sugar reserves in the republic amount to about 90 thousand tons, including:

“Taking into account the republic's monthly consumption of about 44,000 tons of sugar, factories can produce about 50,000 tons. That is, the plants fully meet the country's demand for sugar,” Oserbay informed.

Food Corporation JSC, according to him, is currently accepting applications and selling sugar to the regions. According to the Association of Confectioners of Kazakhstan, confectionery factories are also provided with the necessary amount of sugar for the near future. In addition, according to the vice minister, by the decision of the EEC Council, the Republic of Kazakhstan was granted the right to duty-free import of white sugar and raw cane sugar in the amount of 250,000 tons.

“Thus, taking into account the reserves and volumes of quotas, the republic is fully provided with sugar,” Oserbay informed.

“Stocks of vegetables and potatoes are also sufficient to meet the needs of the population. At the same time, there is currently a restriction on the export of oil, sunflower seeds and potatoes,” Oserbay summed up his speech.

Over the past week, prices for socially important food products rose by 0.2%.

In turn, Yerzhan Kazanbayev, chair of the Trade Committee of the Ministry of Trade and Integration of the Republic of Kazakhstan, also noted that the ministry is constantly monitoring prices for socially significant food products. The main monitoring channels, according to him, are the data of statistics and fiscal data operators (hereinafter referred to as FDO). 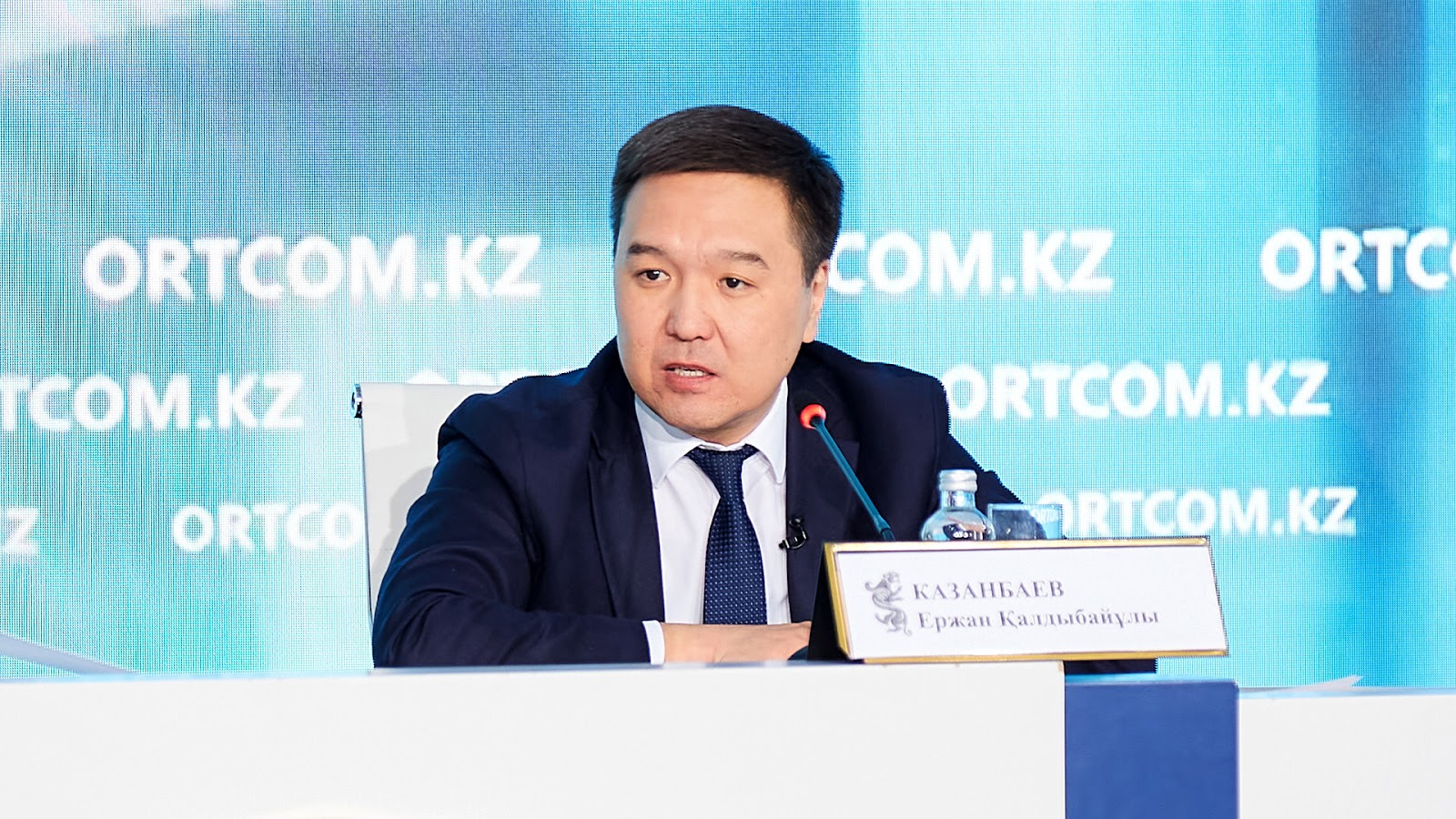 “According to the Bureau of National Statistics, prices for socially important food products increased by 0.2% over the past week. Cabbage went up the most by 1.6%, sugar by 0.6% and potatoes by 0.5%,” Kazanbayev stated.

In terms of regions, according to him, the maximum increase in prices for the week was allowed in the Mangystau region by 0.8%, in Kostanay and Kyzylorda regions — by 0.4%. According to OFD, prices increased by 0.6% over the week.

As the head of the committee noted further, this issue is regularly considered in the Government under the leadership of the Prime Minister. On March 12, under the leadership of the Deputy Prime Minister - Minister of Trade and Integration of the Republic of Kazakhstan, Bakhyt Sultanov, a meeting was held on issues socially significant products, at which specific instructions were given to all regions, including the regions that allowed the maximum price increase.

In addition, together with the LEB, work is constantly being carried out to control prices for each item of food, including control over compliance by trade entities with the allowable trade markup. The Agency for Protection and Development of Competition of Kazakhstan is also working on price control.

Currently, according to the chairman of the committee, work continues on the previously initiated 7 investigations on signs of anti-competitive concerted actions to inflate prices for the products in Kostanay, Karaganda, Akmola, Pavlodar and North Kazakhstan regions.

“7 acts of antimonopoly compliance were concluded to prevent violations of competition law, as well as in terms of reducing the trade markup on the products from 15 to 10% during their implementation,” Kazanbayev informed.

According to him, the work of regional commissions to investigate intermediary schemes along the entire pricing chain has also been strengthened with the adoption of appropriate measures. Also, the speaker on behalf of the Ministry of Trade commented on the situation in the country with the boom in sugar.

The Head of the Committee also noted that there are many requests from journalists and the public regarding the discovery of facts of overpricing for the products at retail outlets. Here, according to him, there are several channels where you can apply: these are akimats, the Committee for the Protection of Consumer Rights, the MIT Trade Committee, or the Agency for Protection and Development of Competition of Kazakhstan.

Journalists were also interested in the issue of subsidizing sugar production over the past year. On this occasion, Vice Minister of Agriculture Oserbay replied that within the framework of the approved national project, the ministry is working on import substitution of 6 products, one of which is sugar.

“The main task is to increase the production of sugar beets, from which sugar is produced. At the moment, there are four factories in the country in the Zhambyl and Almaty regions. It is planned to modernize them and build a new plant in the Zhambyl region. About 10 thousand tenge per ton is allocated annually. Up to 350 thousand tons of sugar beets are harvested annually in the country. There is a large program of land irrigation in order to stimulate farmers. Funds are being allocated for sprinkler machines,” said Oserbay.