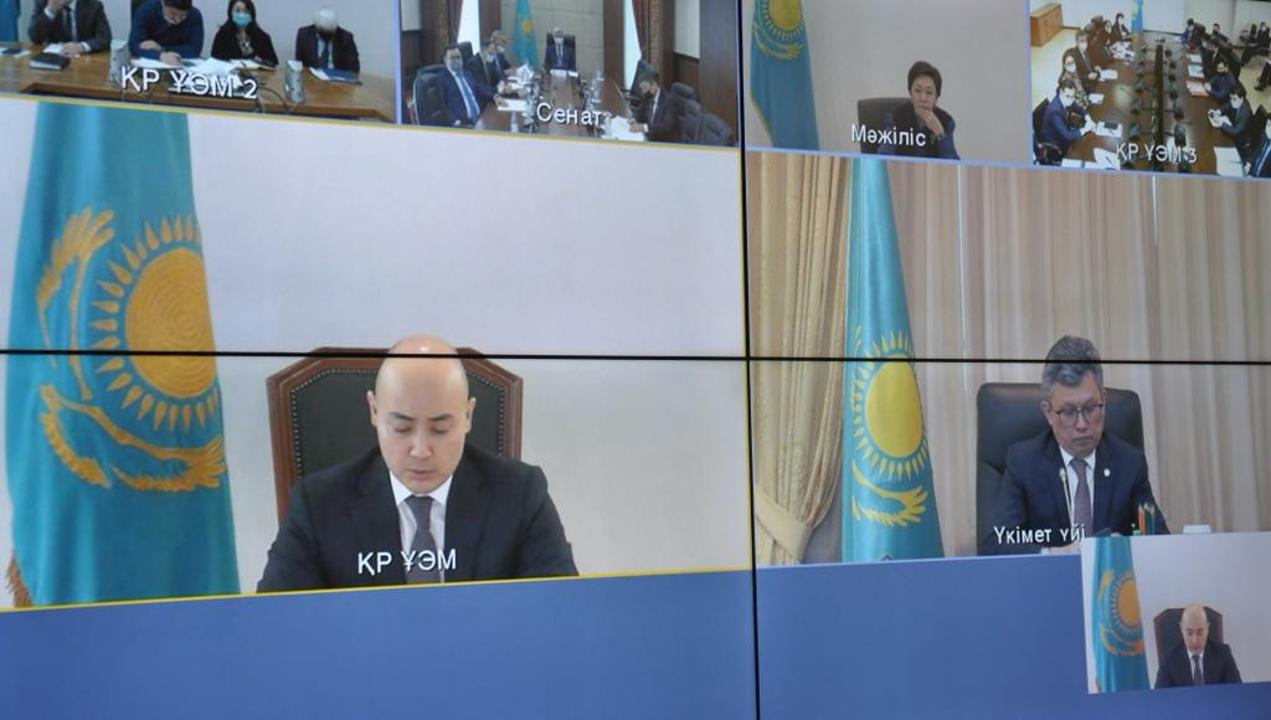 At the extended meeting of the board of the Ministry of National Economy of Kazakhstan, the head of the ministry summed up the results of work for 2021 and told about the tasks for 2022.

The Ministry is working within 8 main areas of activity aimed at ensuring socio-economic stability.

“Based on the results of macroeconomic policy over the past year, Kazakhstan's economy was ensured that the economy of Kazakhstan entered a dynamic trajectory of sustainable growth. According to the results of the year, the growth was 4%,” said the Minister of National Economy of the Republic of Kazakhstan Alibek Kuantyrov.

Last year, as part of the implementation of the budget policy, the ministry provided the necessary regulatory framework for the transition in 2022 to a new lean and responsible budget policy. Thus, the Budget Code of the Republic of Kazakhstan regulates countercyclical budgetary rules to limit the growth rate of republican budget expenditures and the size of the guaranteed transfer from the National Fund. Also, the ministry has taken measures to integrate the funds of two off-budget funds into the budget process. In addition, the Ministry of National Economy of the Republic of Kazakhstan developed the Concept of Public Finance Management until 2030.

This year the task is to develop bills on the volume of transfers of a general nature for the next three years, taking into account the new approaches developed in interbudgetary relations. Along with this, the ministry has started preparing a new document in line with OECD best practice — Analytical Report on Fiscal Risks and Public Finance Sustainability. The document will be submitted together with the draft three-year budget to the Parliament. Also, in order to implement the instructions of the Head of State, a package of amendments to the budget legislation is being prepared to introduce elements of the block budget.

In the area of ​​tax policy, 2 laws and 4 government resolutions have been adopted. The adopted laws provide incentives for production, support measures for social entrepreneurship entities, and measures to simplify administration and payment of taxes. In general, the measures taken were aimed at stimulating the business activity of small and medium-sized businesses.

This year, within the framework of tax policy, the work will be aimed at implementing the instructions of the Head of State given last year and at the beginning of this year.

The Ministry plans to:

As part of the development of entrepreneurship, a law was passed last year aimed at introducing the New Regulatory Policy — regulation from scratch. A single day for the report of control and supervision bodies was introduced, as well as the principle of one requirement instead of two — the “1 in 2 out” principle. A ban on reporting requirements for which automation will not be provided is fixed.

The Concept of the investment policy of the Republic of Kazakhstan and the methodology for assessing the investment attractiveness of regions and a unified investment standard were developed. Changes have been made to reduce the terms of economic expertise of state investment projects, improve the assessment of the implementation of budget investments. The goal for 2022 is to attract 19.5 trillion tenge of investment in fixed assets with a level of 18.5% of GDP.

As part of improving legislation and improving the quality of PPP projects, it is planned to revise the approach to determining a private partner through direct negotiations. According to these projects, the possibility of reimbursement of costs from the budget will be excluded. In order to strengthen anti-corruption control of PPP projects, it is planned to introduce the principle of openness and transparency in the process of planning and implementing projects.

The course to reduce the excessive presence of the state in the economy continues. The comprehensive privatization plan until 2025 includes 721 state-owned enterprises. The implementation of the Comprehensive Plan at the end of 2021 is 35%. Thus, today the share of state participation in the economy has been reduced to 14.6%.

This year, the Ministry of National Economy of the Republic of Kazakhstan is taking measures to develop a Concept for reforming the quasi-public sector and updating the Comprehensive Privatization Plan for the five-year period 2021-2025.

As part of the regional development program, work was carried out to improve the regional policy. Thus, the Ministry of National economy, 2 documents were developed and approved within the framework of the new State Planning System. These are the Plan of Territorial Development of the Republic of Kazakhstan until 2025 and the National Project "Strong Regions - the Driver of the Country's Development". The documents are aimed at improving housing and communal conditions, developing housing and communal construction, increasing the country's transport and transit potential, modernizing basic SNPs, as well as creating new jobs.

As part of the message of the Head of State to the people of Kazakhstan dated Sep. 1, 2021, a draft law “On the development of agglomerations” was developed. In September this year, the bill is planned to be submitted to the Mazhilis of the Parliament.

In order to improve the quality of life of the population in cities and villages, work has begun on updating the joint order of the central state bodies “On approval of the System of regional standards for settlements of the Republic of Kazakhstan”.

“On the implementation of the Concept for the Development of Local Self-Government, legislative amendments have been adopted. These are: the introduction of direct elections of rural akims, the expansion of the independence of level IV budgets, the strengthening of the powers of maslikhats. The requirements for the procedure for changing the categories of administrative-territorial units have been improved,” the minister said during a board meeting.

Six comprehensive plans for the socio-economic development of the North Kazakhstan, Turkestan regions, Kyzylorda, Atyrau, Mangystau regions and the city of Ekibastuz of Pavlodar region were approved.

On behalf of the Head of State, the comprehensive plans of the western regions, namely Atyrau, Mangystau, Aktobe and West Kazakhstan regions, have been updated.

“As part of the Auyl-El Besigi project, 1,140 projects were implemented to modernize villages for a total of 96.2 billion tenge. Through the implementation of these projects, 9 thousand jobs have been created, about 1.7 thousand km of intra-village roads, 1.3 thousand km of engineering networks and 302 social facilities have been modernized,” the head of the department reported.

Within the framework of the project “With a Diploma - to the Village”, 18.2 billion tenge was issued for the provision of budget loans for the purchase of housing for 4.3 thousand specialists.

This year, within the framework of the tasks set for the year, 10.2 billion tenge was allocated for the development of mono- and small towns for the implementation of 26 projects. It is planned to create about 500 jobs and upgrade 200 km of intra-city roads and engineering networks.

In order to develop the outskirts of large cities, 26 billion tenge was allocated for the implementation of 32 projects. This will make it possible to build about 600 km of roads and engineering networks, as well as 3 social facilities (school, kindergarten, clinic).

In addition to the above, this year new laws will be developed aimed at:

As part of the execution of the instructions of the Head of State, a legislative basis will be prepared for the election of akims of districts and cities of regional significance.

In 2022, a decree will be approved aimed at improving communications between the population and akims, increasing citizens' confidence in local authorities, the responsibility of local executive bodies, as well as reducing social tension in the regions.

On tariff policy issues, in 2021, the growth in regulated utilities was 2.88%. Taking into account the measures taken to curb growth and reduce tariffs, the actual contribution to inflation from tariffs for regulated utilities for 2021 amounted to 0.22%.

As part of the improvement of the tariff policy in the spheres of natural monopolies, the following work was done this year:

These measures made it possible to reduce the impact on the cost of thermal coal and on the prices of socially important goods. Work has been carried out to allocate a separate group - "socially vulnerable consumers" for gas supply services.

In 2022, as part of the tariff policy, the following will be ensured:

In general, today, in pursuance of the instructions of the Head of State, the ministry is taking operational and systemic measures.

The Action Program of the Government of the Republic of Kazakhstan for 2022 has been developed. The program is the first stage in shaping the country's new economic course for the medium term and is aimed at achieving the goals of ensuring macroeconomic stability, diversifying the economy, developing entrepreneurship and human capital, and ensuring the security of citizens and entrepreneurs.

A set of measures has been developed to control and reduce inflation for 2022-2024, providing for an increase in production volumes, storage and logistics of goods, retail trade in goods, pricing control, antimonopoly and foreign trade regulation. A draft program for increasing the income of the population has been developed, the activities of which are aimed at real improvement in the quality of life of the population.