Implementation of income increase program: Thanks to investment projects, more than 2 million new jobs to be created in Kazakhstan by 2025 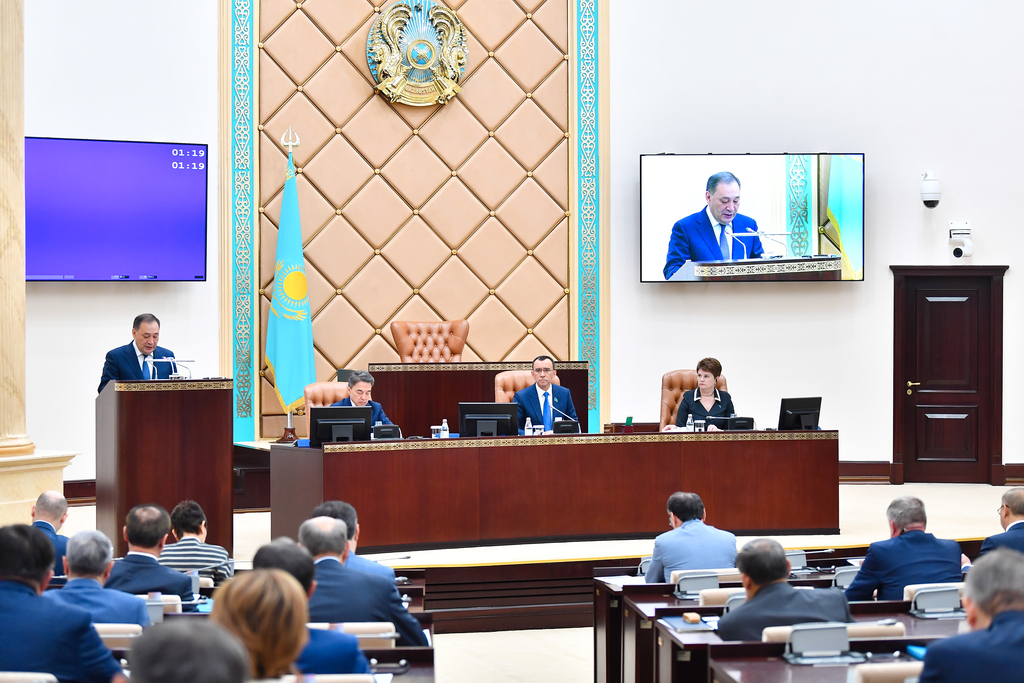 Deputy Prime Minister of the Republic of Kazakhstan Yeraly Tugzhanov spoke in the Senate of the Parliament of the Republic of Kazakhstan about the program to increase the income of the population, which was developed in accordance with the instructions of the Head of State Kassym-Jomart Tokayev and approved by a Government decree. The program provides for specific measures to increase the income of citizens. Including the tasks provided by national projects are grouped.

According to Tugzhanov, international experience based on the direct participation of interested parties is used for the first time in the implementation of a country-wide program. Currently, a project office has been established and is operating at the Institute of Economic Research of the Ministry of National Economy to support the program. When considering the updated budget in the Senate, it was proposed to pay attention to the experience of foreign countries in combating poverty.

“We conducted a detailed study and analysis of international practice. China has taken measures such as improving irrigation infrastructure to increase the productivity of agricultural commodities, which are successful in rural areas. The European model of fighting poverty is aimed mainly at the development of the insurance system. The longer a person works, the higher his level of social protection (the amount of benefits increases). This model is typical for such countries as Germany, the Netherlands, France. And in the countries of Southern Europe, social benefits and subsidies from the budget are provided in limited amounts. Therefore, we also did not limit ourselves to including only direct measures aimed at raising wages in the program,” explained Tugzhanov.

An important part of the program is that it includes areas that contribute to the new economic growth of the country, creating conditions for the employment of citizens, as well as indirect measures that instill new skills. As for direct measures, the program provides for wage increases for more than 1.1 million workers. Among other things, the salaries of more than 850,000 public sector employees will be increased.

“The salary of doctors will increase from 320,000 to 531,000 tenge, of paramedical workers — from 173,500 to 250,000 tenge (in 2023 compared to 2021,000 tenge). Since April of this year, the wages of 258,000 production personnel of the group of companies of NWF Samruk-Kazyna JSC have been increased from 5 to 48%. At the same time, priority was given to low-paid positions. Thus, the salary of the courier-driver of Kazpost increased from 144 thousand tenge to 237 thousand tenge. Thus, specific measures have already been implemented to increase the income of citizens,” the Deputy Prime Minister informed.

At the same time, work will continue to increase the income of employees at the expense of the fund's internal reserves. By the end of the year, the wages of production personnel in 4 more companies will increase from 5% to 18%.

In addition, due to the establishment of obligations in relation to large businesses that receive support measures from the state, the average wage of 2.8 million employees will increase.

“Two weeks ago, we heard the preliminary results of work in this direction with the participation of large businesses in the Karaganda region. As a result, it has already been possible to increase wages in large industrial enterprises from 15% to 30% in Kazakhstan. Among them are Kazminerals (15%), KazAzot (20%), ERG (25%), Kazakhmys (30%),” the Deputy Prime Minister said.

Through the implementation of investment projects in various sectors of the economy, more than 2 million new jobs will be created by 2025. Of these, 950 thousand in industry and entrepreneurship, 583 thousand in infrastructure projects, 458 thousand in the agro-industrial complex, and 59 thousand in the tourism industry.

In particular, in the industrial sector (mining and smelting complex, mechanical engineering, chemical industry, brick and cement production), a total of 713 projects are planned. Of these, 165 projects will be launched this year with the creation of more than 16 thousand new jobs (by 2025 - 126.5 thousand jobs).

At present, the task is to improve the well-being of the population by investing in large projects in the country's economy. For this reason, new industries cover not only large cities, but also rural settlements (52.4 thousand places) and single-industry towns (11.1 thousand places).

So, on the example of the city of Saran, Karaganda region, the task is to restore single-industry towns. The three main projects that will be launched in the city are aimed at the production of tires (KAMATYRESKZ), household appliances (ARTEL), trucks (QAZTEHNA). In total, 2,500 jobs will be created in it.

As Tugzhanov emphasized, last year the total volume of purchases of goods and services by subsoil users in the energy sector amounted to 4.7 trillion tenge, of which about 40% were purchased from other countries. Today, this is one of the most pressing issues on the agenda.

The industry average indicator of the share of local content was only 61.8% (by 2.9 trillion tenge), that is, there is sufficient potential for localization (1.7 trillion tenge). In this regard, it is planned to create highly productive jobs by localizing new production facilities for 19 types of demanded industrial goods in the oil and gas industry. One of them is the construction of the first Integrated Gas Chemical Complex in the Atyrau region (Kazakhstan Petrochemical Industries Inc. LLP).

Work is also underway to develop local products for the needs of the largest operators (Tengizchevroil, Karachaganak Petroleum Operating, North Caspian Operating), which account for 75% of subsoil user purchases.

“Already today, work has begun on the localization of production for 3 product groups - these are shut-off valves, control and measuring devices for automation, and electrical equipment. 4 agreements have been signed with companies producing these types of equipment,” said Tugzhanov.

Until 2025, in order to protect the purchasing power of the population, 100% import substitution measures will be implemented for food products, except for sugar. These measures will be implemented through the commissioning of 87 large dairy farms, 14 meat processing plants, 17 poultry farms and the construction of 6.6 thousand hectares of orchards and one sugar factory in Pavlodar.

In addition, it is planned to create 280 agricultural cooperatives, uniting more than 9 thousand family farms for the production of melons, dairy and honey products. In general, as Deputy Prime Minister Tugzhanov noted, by 2025, as part of the development of the agro-industrial complex, it is planned to create more than 450,000 jobs through the implementation of the Auyl Amanats project.

At the same time, within the framework of the pilot project, work is underway to develop an effectively implemented family farm in the Zhambyl region and other regions of the country. The pilot project has been implemented in 11 rural districts since 2019. As a result, the incomes of 2.5 thousand families that took part in the project increased by 4 times.

The number of recipients of targeted social assistance in these villages decreased by 65%. The effectiveness of the project allowed the state to save 1 billion tenge. The number of entrepreneurs has increased from 966 to 3,248, “that is, every third family is engaged in entrepreneurship,” Yeraly Tugzhanov emphasized during the report.

The vice-premier also noted that now the volume of annual tax revenues from 11 villages has reached 125 million tenge. The program includes a set of measures to generate stable incomes for socially vulnerable segments of the population.

In particular, it is planned to create conditions for receiving income at home for mothers of many children, as well as mothers raising children with disabilities. According to official statistics, there are about 440,000 mothers with many children and 92,000 disabled children in the country.

As part of the project, women take short-term courses in professions that are in demand on the labor market and receive free consultations on starting their own business.

According to Tugzhanov, as a result, the calculation is for the annual employment of up to 20 thousand women. This work is coordinated by the council of mothers and carried out by family support centers in the regions. Also in this direction, mechanisms for employment of people with disabilities will be improved.

“By 2025, it is planned to employ at least 30% of people with disabilities fit for work. In general, the number of able-bodied disabled people today is 417 thousand, in 2021, 24.8% of them were employed,” said Tugzhanov.

“South Korea, which adopted a special program in this area 12 years ago, ranked seventh in the global media entertainment market in 2020. Today, the volume of creative exports of this country has exceeded $12 billion. Therefore, special attention is paid to the development of the creative industry,” the Deputy Prime Minister of the Republic of Kazakhstan emphasized during his speech.

Speaking about the advantages and benefits of the creative economy, the Deputy Prime Minister noted the following:

There are also a number of issues regarding the copyright protection mechanism. In general, bills aimed at the development of the creative industry will be developed and submitted to the Parliament.

As you know, the program for increasing the income of the population was developed in accordance with the instructions of the Head of State and approved by a government decree. At a meeting with business representatives, the Head of State noted the importance of increasing the share of wages in the gross domestic product. The program aims to increase this indicator from 31% to 38.5%. The share of income from employment in total income will increase from 70% to 82%.

The program provides for specific measures to increase the income of citizens. Including the tasks provided by national projects are grouped.

The implementation of the program is directly related, first of all, to the correct explanation, bringing it to the attention of the population.

All ministries and local akimats are involved in the implementation of the program. Together with the Ministry of National Economy, reports were heard from the ministries of agriculture, industry, energy, labor, and the Samruk-Kazyna Fund.