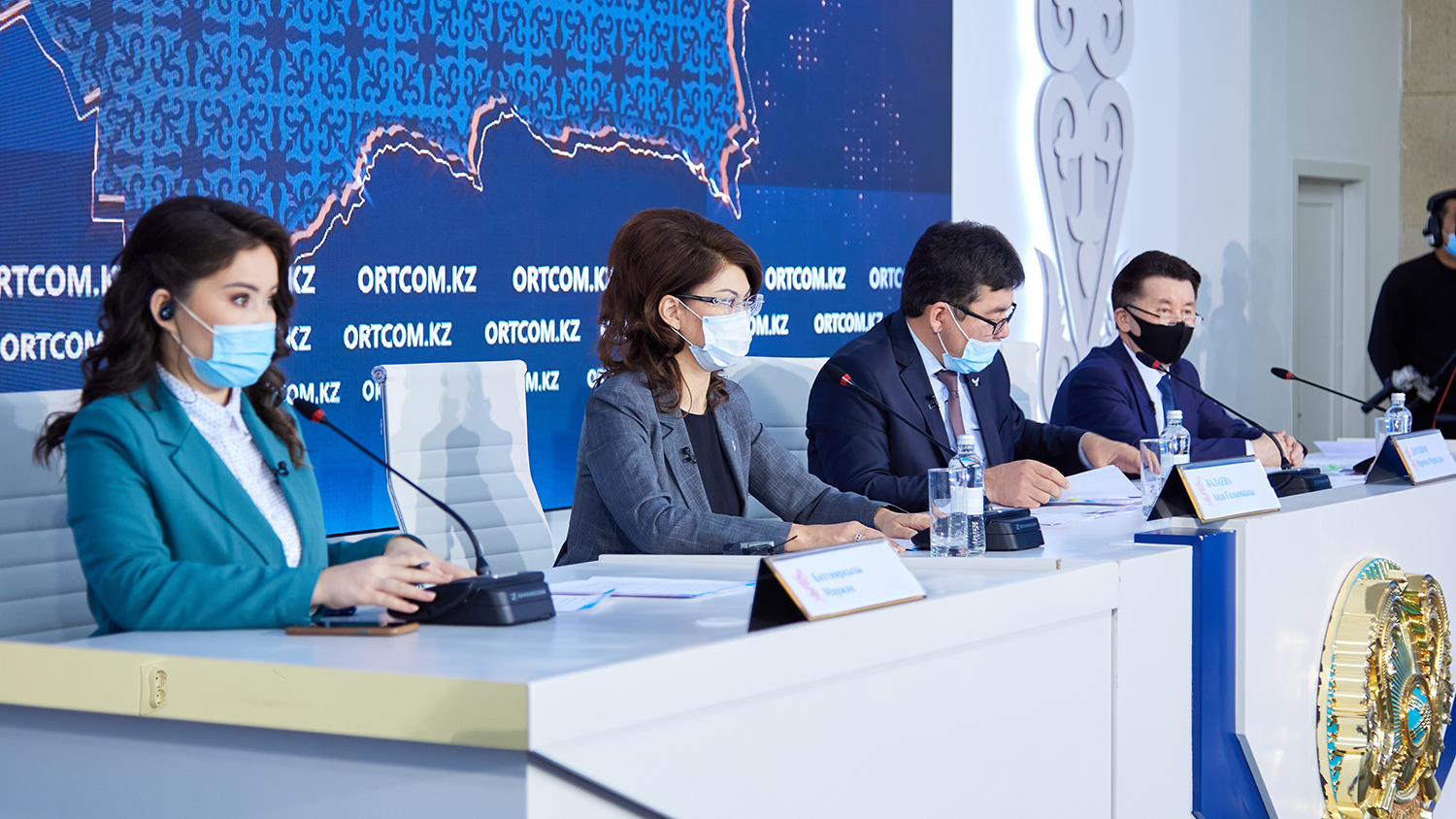 Minister of Information and Social Development of the Republic of Kazakhstan Aida Balayeva at a briefing in the Central Communications Service reported on the main directions of the national project "Ulttyq Ruhani Zhangyru".

On Oct. 13, 2021, the Head of State Kassym-Jomart Tokayev signed a decree “On Approving the List of National Projects”. On its basis, 10 specific national projects have been identified. Including the project "Ulttyq Ruhani Zhangyru", which includes 3 directions, 7 tasks, 21 indicators and 66 large-scale events.

The main goal of the project is to preserve the national code, revive cultural identity, promote national values ​​and traditions, and raise the cultural level and spirit of society.

The project opens up new opportunities for young people and aims to provide all-round support to their various initiatives.

“The project is large-scale and with deep meaning. This is a cultural reality, history and roots of our people, formed over many centuries. Therefore, especially in the context of modern globalization, it is important to preserve it, absorb it through the generations,” said the Minister of Information and Social Development.

To address these issues, it is planned to implement the project in three main areas.

The first direction is the further promotion of the values ​​of Ruhani Zhangyru, which were laid down by the ideas of the First President - Elbasy in his programme article. Here, the task of developing the state language is separately designated.

In general, 38 projects are planned for this block, the ultimate goal of which is to support and develop the creative and intellectual potential of the nation.

“The second important task of this direction is to expand the scope of the state language. After all, the very preservation of the nation is the preservation and development of the language. As you know, the Head of State expressed confidence that the Kazakh language will become interethnic in the future. He has every reason today. The demand of society for the state language is growing. This is the demand of the time,” Balayeva noted.

In addition, a number of large-scale projects are being considered in this matter. In particular, there are systemic measures for teaching the state language, such as the development of innovative IT products, the Kazakhization of popular animation and educational channels, changes in the language programs of secondary education, the development of textbooks in the Kazakh language for organizations of technical and vocational education.

In short, our goal is to simplify as much as possible the Kazakh-speaking environment in society, to make it the language of science and education, business and society, and not only in everyday life.

The second direction is called "El Ruhy" and combines a set of measures to increase the availability of services in the field of culture, as well as the promotion of domestic products, including abroad.

For this, 13 major events are envisaged with the achievement of 5 specific results by 2025.

- through the development of infrastructure, including the construction of new cultural facilities, coverage of cultural services will be provided to 92.5% of the residents of villages and remote settlements. In general, it is planned to double the number of visits to cultural sites, and the level of satisfaction of the population with the quality of services in the field of culture to 75%. For these purposes, 250 new cultural objects will be built and 1,200 existing cultural objects will be overhauled;

- through direct support of the country's creative potential, a system of reproduction of domestic cultural products will be created, including an increase in the share of domestic films in film distribution to 25%, the production of about 40 animated films on the basis of the creative association "Kazakhanimation", which will also be created anew, as well as support 150 projects of talented individuals with great creative perspective.

“I would also like to mark the project of the Unified Electronic Platform of e-culture.kz, which allows online access to all the achievements of national culture in a free mode, when, for example, from anywhere in the world, without leaving your home, you can visit our museum and theaters, libraries and other cultural attractions,” Balayeva said.

The third direction was called "Tauelsizdik Urpaqtary" and is dedicated to the country's youth.

“As you know, this year children born in the first years of independence will be 29-30 years old. Undoubtedly, these youth are not only a descendant of a sovereign country, but also a hope for the future, the master of tomorrow. Therefore, the creation of conditions for their state support is one of the main goals of this project. It includes three large-scale tasks aimed at spiritual improvement and professional maturity of young people,” the Minister of Information emphasized.

- Implementation of measures to address the basic needs of young people. That is, high-quality and affordable education, employment and housing;

- creation of legal conditions for the all-round development of youth, familiarization with spiritual, moral and family values;

To address these issues, 15 large projects will be launched, as a result of which 8 specific indicators will be achieved.

As a result, the following will be ensured:

“At the same time, I would like to draw special attention to measures to support the so-called category of NEET youth, where we set a clear task of reducing the number of unemployed youth to 5%. Thus, by 2025, the level of youth satisfaction with state support measures will be increased to 80%. These are just the main directions of the great work being carried out within the framework of the national project. As I have already said, the forces of three ministries will be involved in its implementation and concrete results will be achieved,” Balayeva explained.

Answering a journalist's question about what is the difference between the national project and other state programs implemented by the ministry, Aida Balayeva noted that the main difference lies in the form of implementation of the tasks.

“The programme article of the First President of Kazakhstan - Elbasy Nursultan Nazarbayev is already 4 years old. During this time, it was not enshrined as a state program. Its implementation was supervised by the National Commission for the Modernization of Public Consciousness. In fact, all the instructions of this commission were carried out and it contributed to the improvement of work in this direction. It was a tactical document with targeted goals. The national project that we talked about today is a strategic document consisting of specific tasks and specific indicators. We know how to achieve these indicators. We know what results we will achieve as a result of the project. The projects are not duplicated, but mutually complementary,” she said.

The next question concerned the timing of the approval of the Latin alphabet. It was answered by the Chair of the Language Policy Committee of the Ministry of Education and Science Adilbek Kabayev.

“Together with scientists, we have developed the latest version of the Latin alphabet. I think it will be seen by the end of the year. Within the framework of the language reform, the spelling of terms, anthroponyms and toponyms will be systematized, the borrowing of words will be mastered, a simplification of the writing norms, company names, etc. will be formed,” noted Kabayev.

He also added that at the present time a draft of the alphabet of 31 letters has been developed.