The Astana Economic Forum, which was established on the initiative of Elbasy Nursultan Nazarbayev, is always held with his participation. AEF 2019 is no exception. First President of Kazakhstan chaired the plenary session of the forum.

The Head of State Kassym-Jomart Tokayev, Prime Minister Askar Mamin, Head of the Administration of the President Bakytzhan Sagintayev also took part in the plenary meeting.

Before the beginning of the plenary session, Elbasy and the President of Kazakhstan made a joint photograph of with the forum participants. 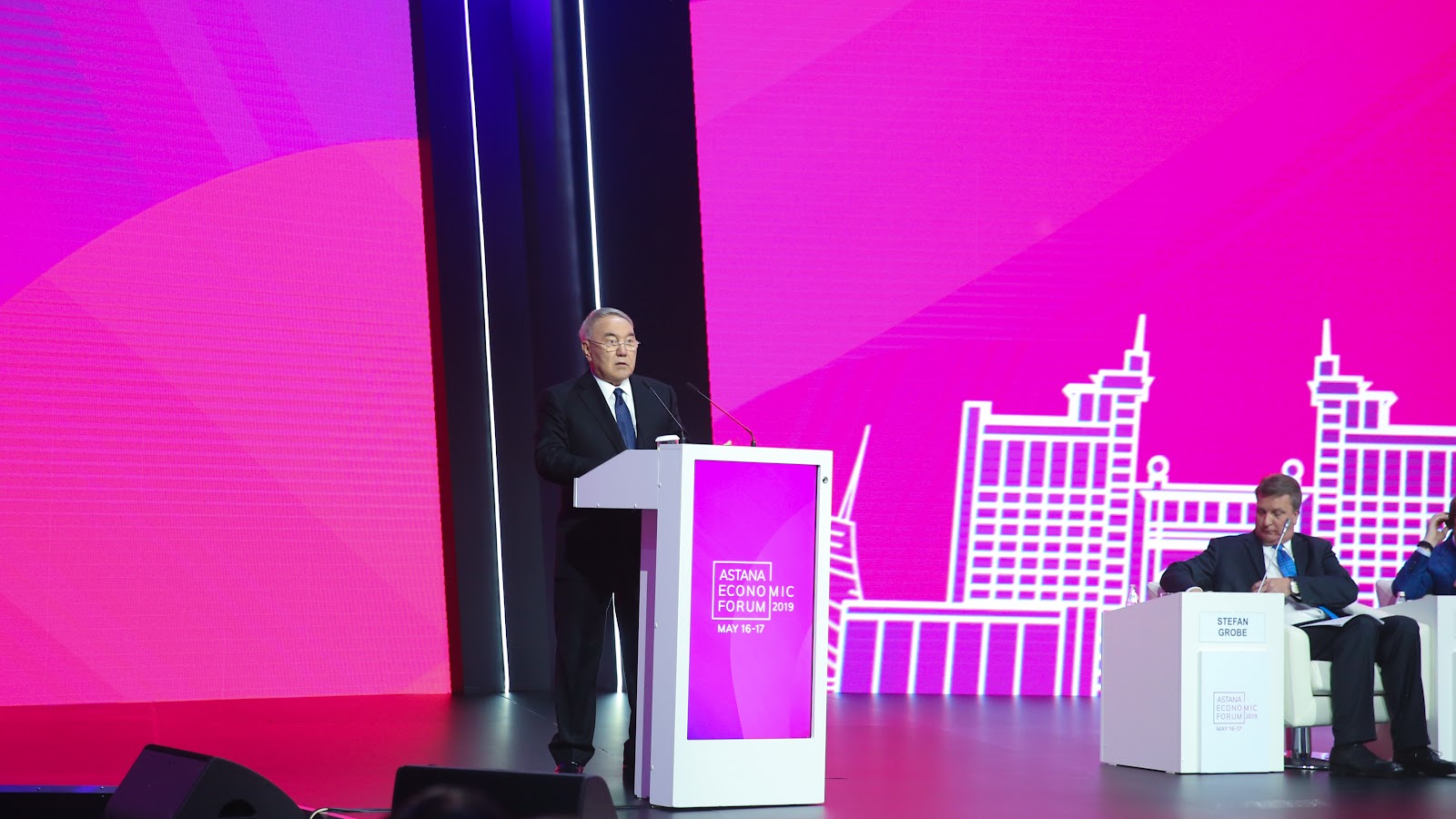 Speaking at the plenary session, the First President emphasized the important role of the AEF in the process of overcoming regional and global challenges.

“The recommendations and ideas that were discussed here in previous years helped Kazakhstan in a timely manner to respond to global challenges and successfully overcome difficulties. You know, the Kazakhstan model of development, despite all the circumstances and forecasts, has already proved its stability and effectiveness. We set ambitious goals and we achieved them,” said Nursultan Nazarbayev.

During the first day of the XII Astana Economic Forum, the Prime Minister held bilateral meetings with the forum participants and took part in the 7th meeting of the International Expert Council, a round table with international expert economists, and a round table on inclusive growth. 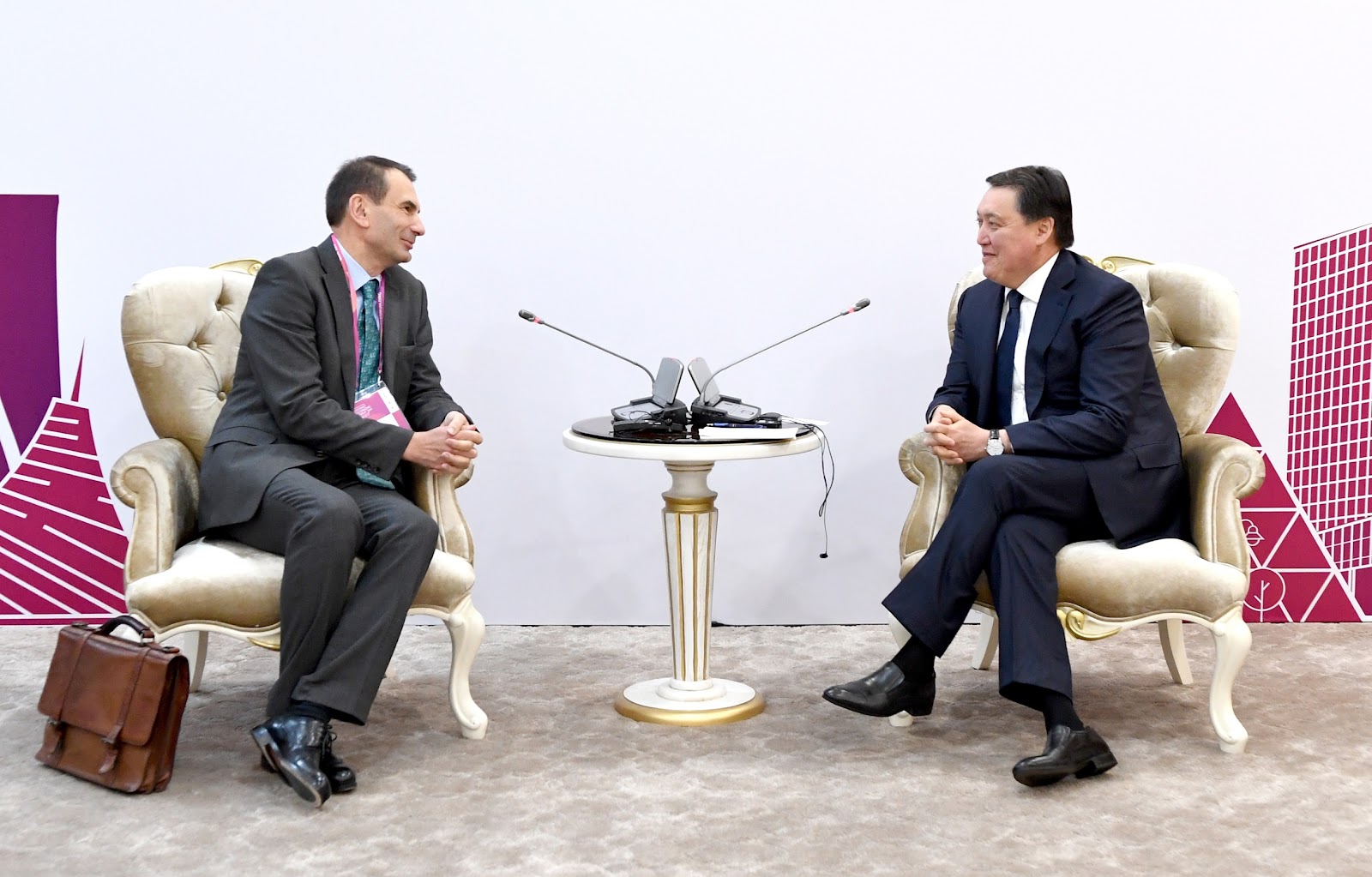 Negotiations with the Vice President of the European Bank for Reconstruction and Development Alain Pilloux were devoted to the implementation of joint projects and the continuation of effective cooperation. 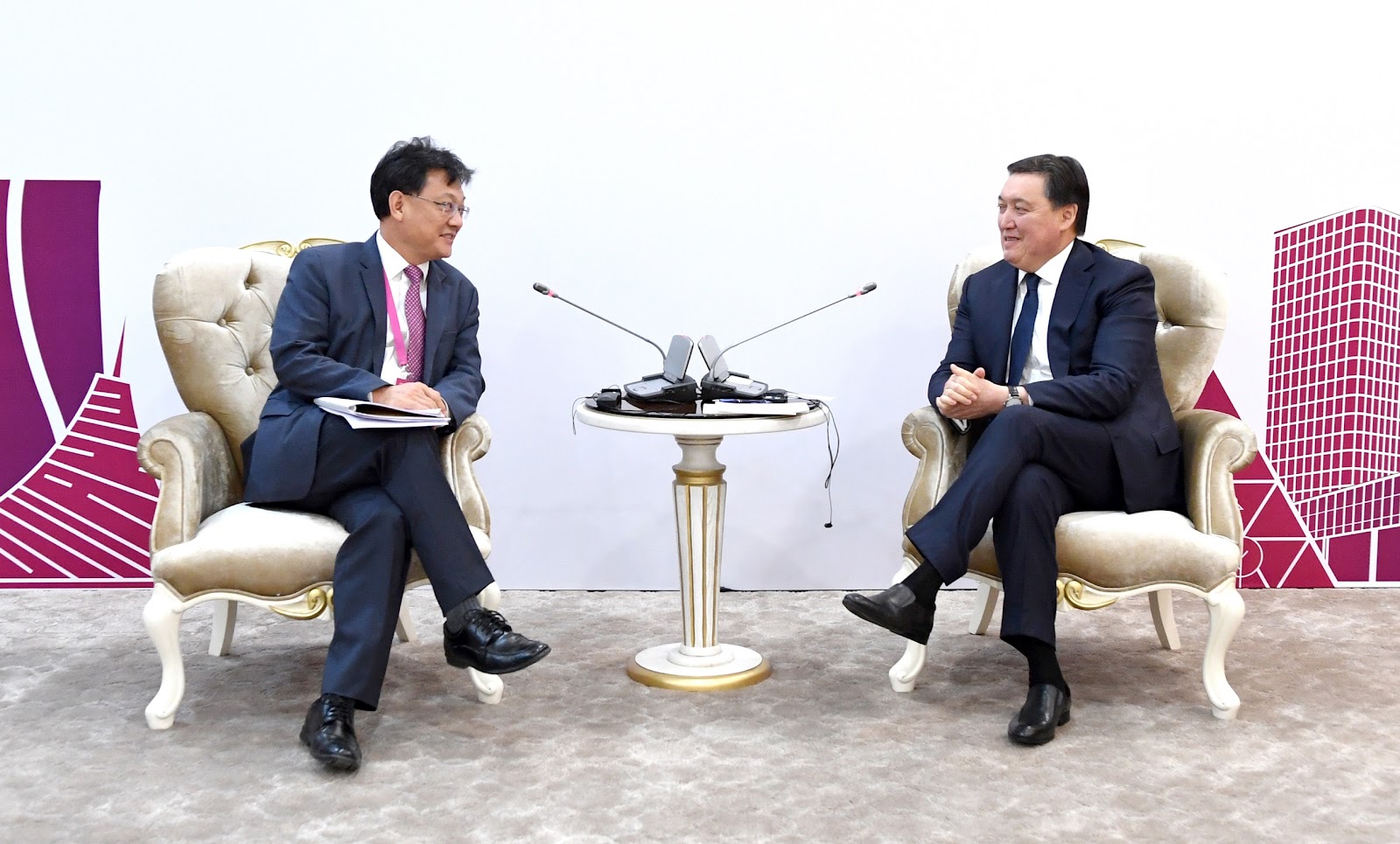 At the meeting with the Vice President of the Asian Development Bank Shixin Chen, topical issues of cooperation within the implementation of the Country Partnership Strategy for 2017–2021, aimed at ensuring sustainable economic growth and structural reforms, were discussed.

During the conversation with the Chairman of the Board of CITIC Bank Li Qingping, the prospects for further expansion of cooperation were considered, including the current activities of Altyn Bank JSC, the shareholders of which include China CITIC Bank. Issues of current cooperation were discussed with the chairman and managing director of the Indian Punjab National Bank, including in the framework of Tengri Bank JSC. 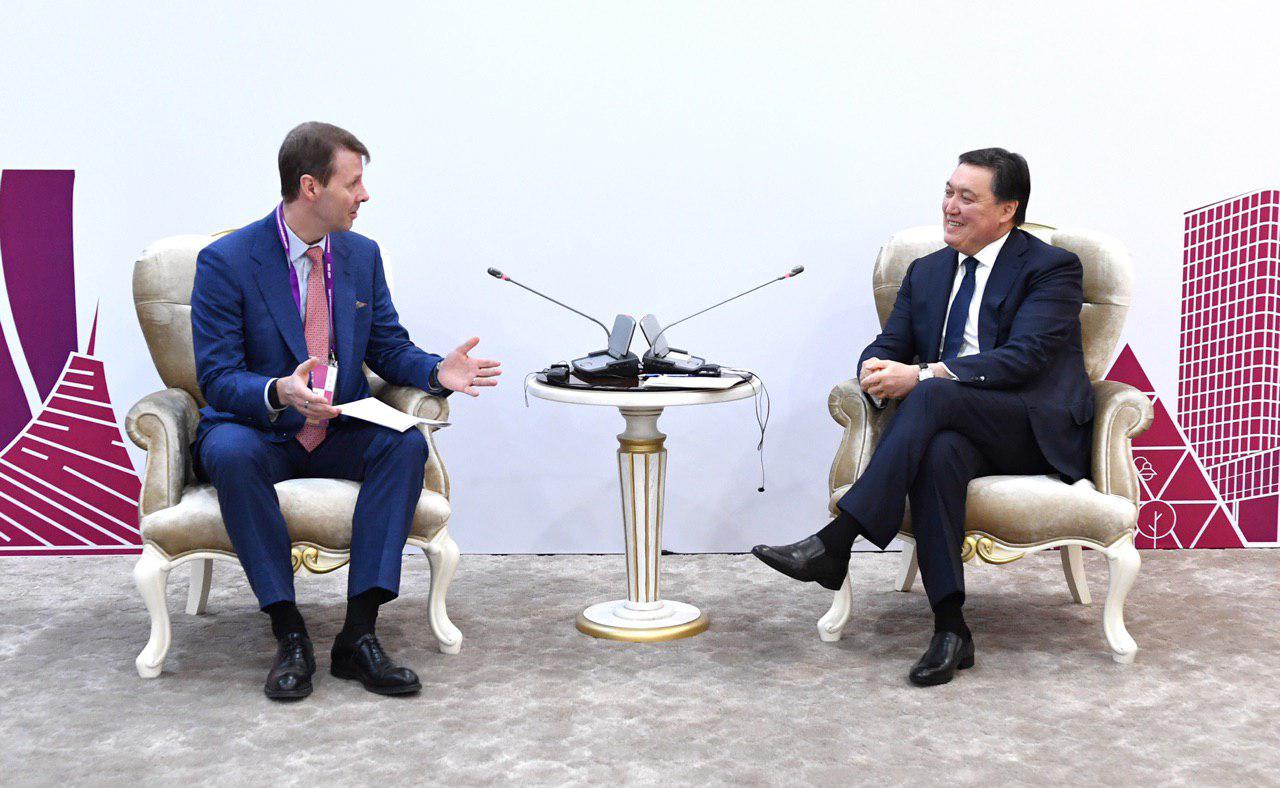 During the meeting with the Chairman of the Board of Nokia Corporation Risto Siilasmaa, modern trends in the development of digitalization were discussed and the prospects for the implementation of joint projects within the framework of the Digital Kazakhstan state program were considered. The parties paid special attention to building up mutually beneficial cooperation in the development of the telecommunications market. 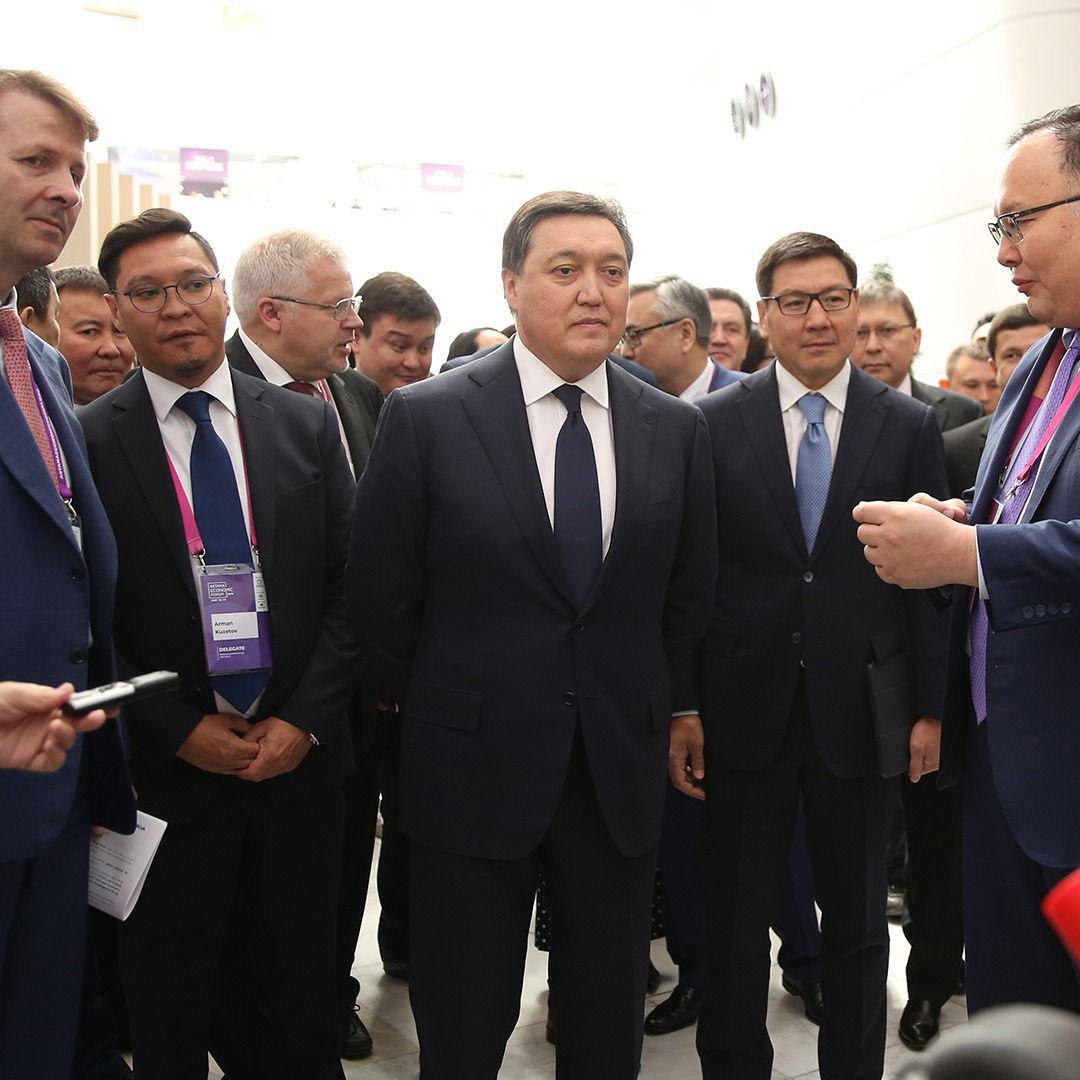 Following the meeting, a presentation of the capabilities of 5G technologies developed by Kazakhtelecom JSC together with Nokia was held. Prime Minister Askar Mamin examined the equipment and quality performance of the network. The introduction of a new network will significantly increase the speed of data transmission, which will allow developing intelligent transport systems, expanding the possibilities of using industrial robots in large production companies, logistics, etc. 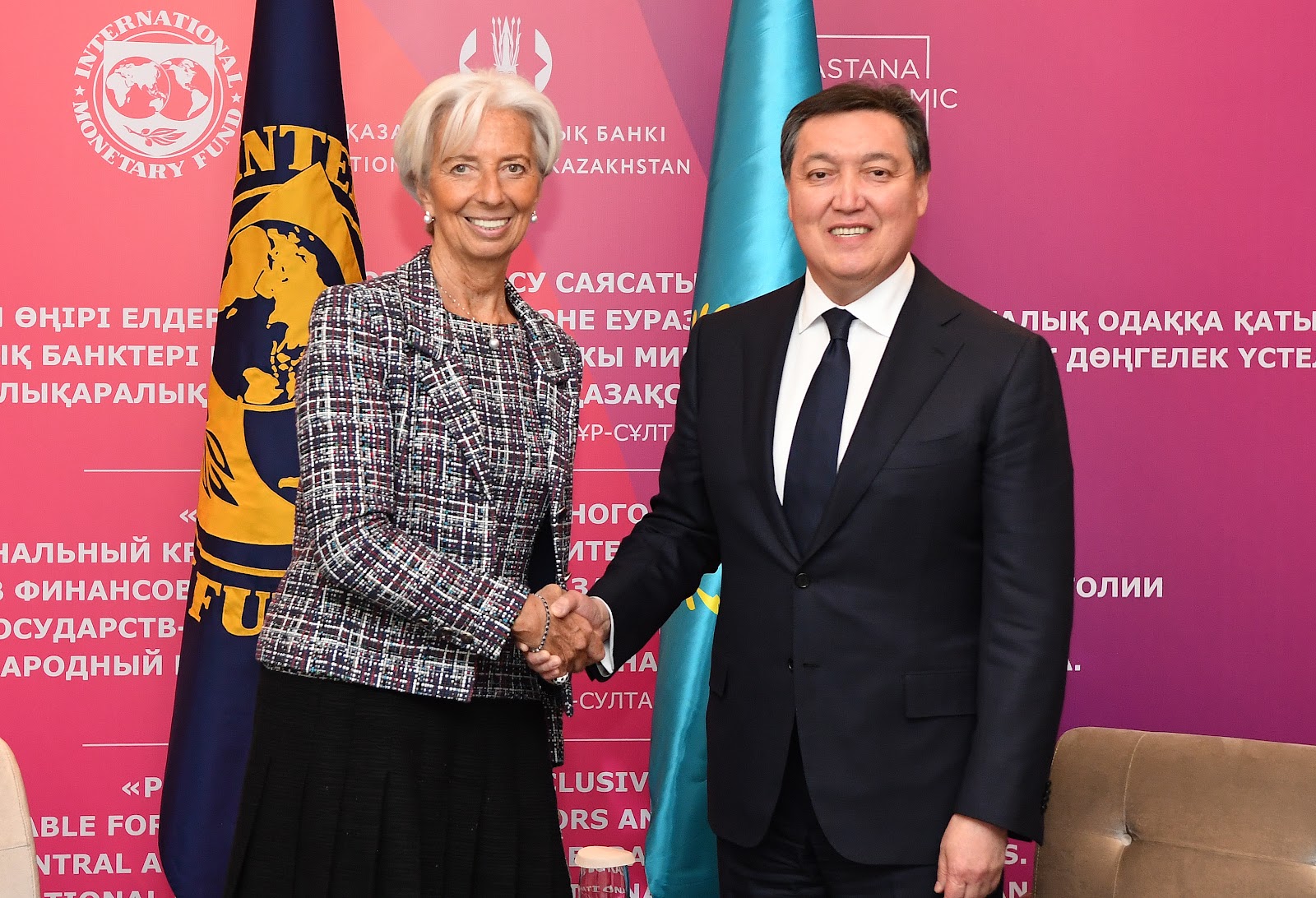 During the conversation with the Executive Director of the International Monetary Fund Christine Lagarde, topical issues of further cooperation to ensure sustainable economic growth, deepening the integration of Kazakhstan into world trade and economic relations were discussed. The parties in a free format exchanged views on global transformation and external risks and challenges. 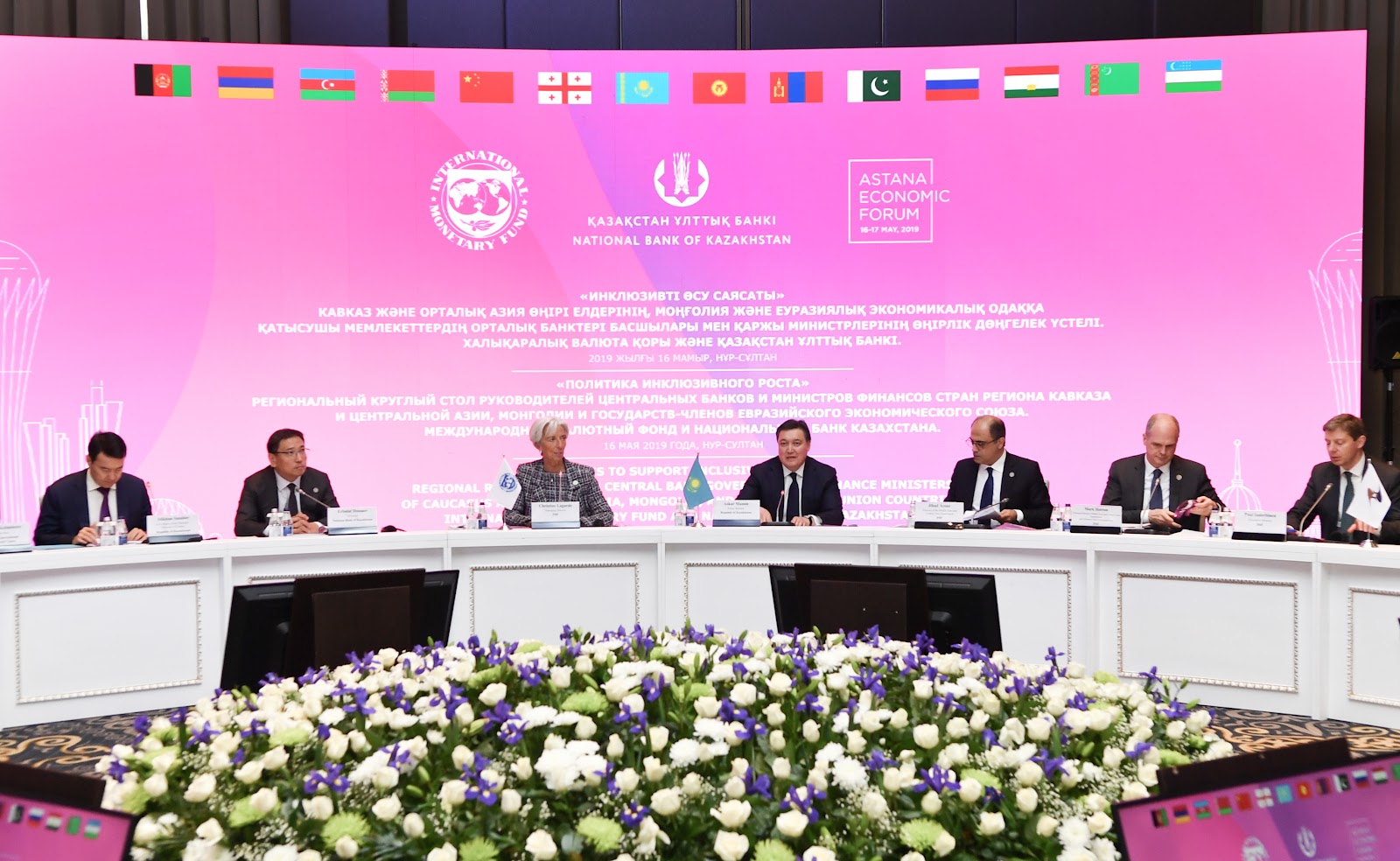 Discussion of topical issues of the economic agenda continued during the high-level round table with the participation of IMF Managing Director Christine Lagarde, Chairman of the National Bank of Kazakhstan Erbolat Dossaev, heads of central banks and finance ministries of the countries of the Caucasus and Central Asia region, the EAEU and Mongolia member states representatives of international financial organizations and diplomatic missions. The round table is devoted to measures of economic policy for inclusive growth.

Prime Minister Mamin said that the main priority of the Government’s work is the transformation of economic growth into an inclusive increase in the welfare of the entire population. The principles of inclusion are increasingly integrated into fiscal, regional and social policies.

“The Government’s economic agenda is focused on social issues,” said the prime minister, stressing that this round table provides an excellent opportunity to deepen a common understanding of the problems of economic growth and well-being of the population around the world, as countering new global challenges will require coordinated efforts international economic and financial community. 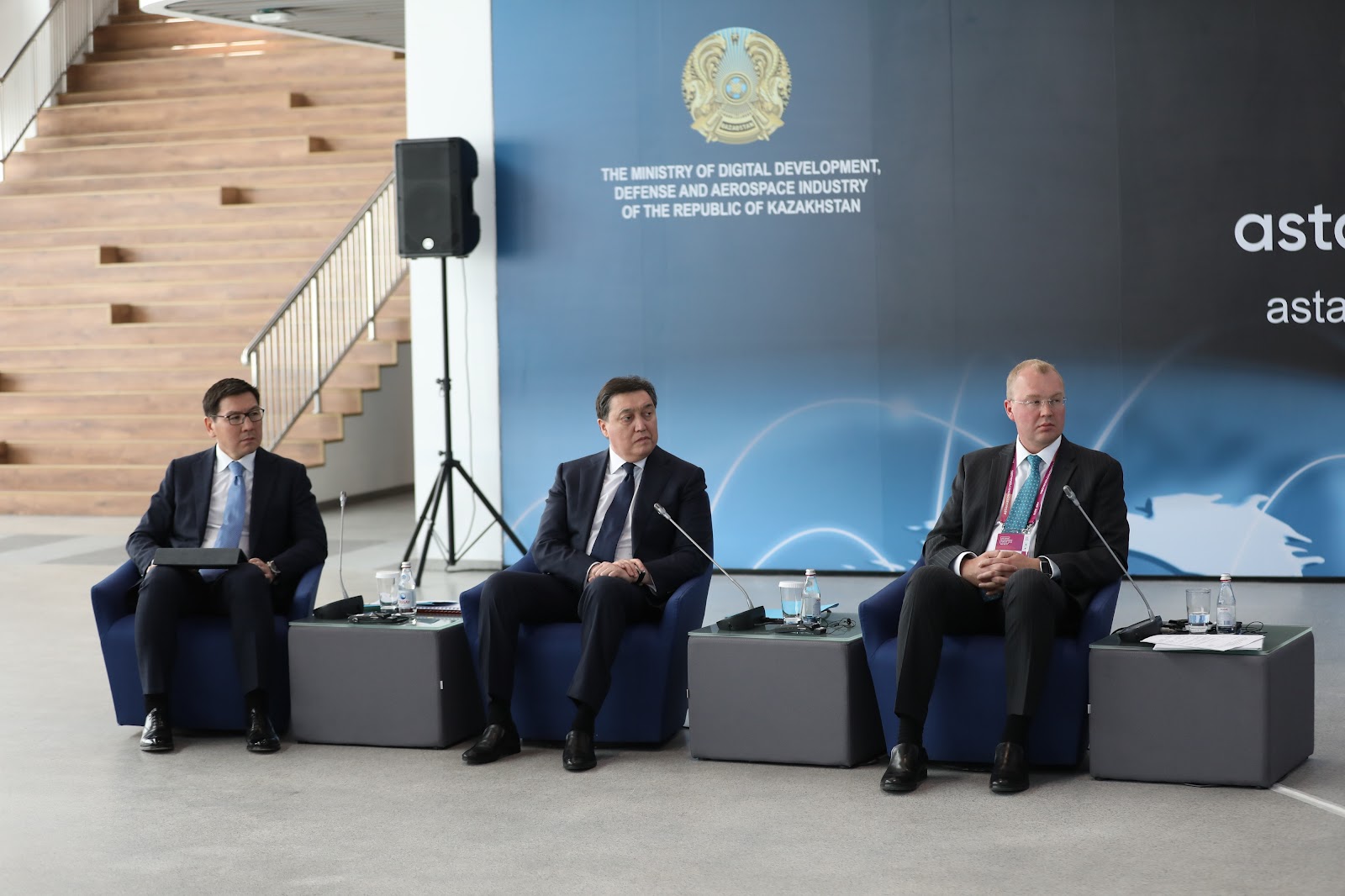 Further, Askar Mamin took part in the work of the VII meeting of the International Expert Council on the theme “Digitization for Achieving Sustainable Social Development.” The prime minister made a welcoming speech to international experts, then the meeting participants freely discussed the possibilities for further integrating digital technologies into various sectors of the economy and expanding their practical application to improve the lives of Kazakhstanis.

A round table was also chaired by the prime minister with the participation of international experts on the theme: “A Look at Kazakhstan: Ensuring Quality Economic Growth for Joining the World’s 30 Developed Nations.” 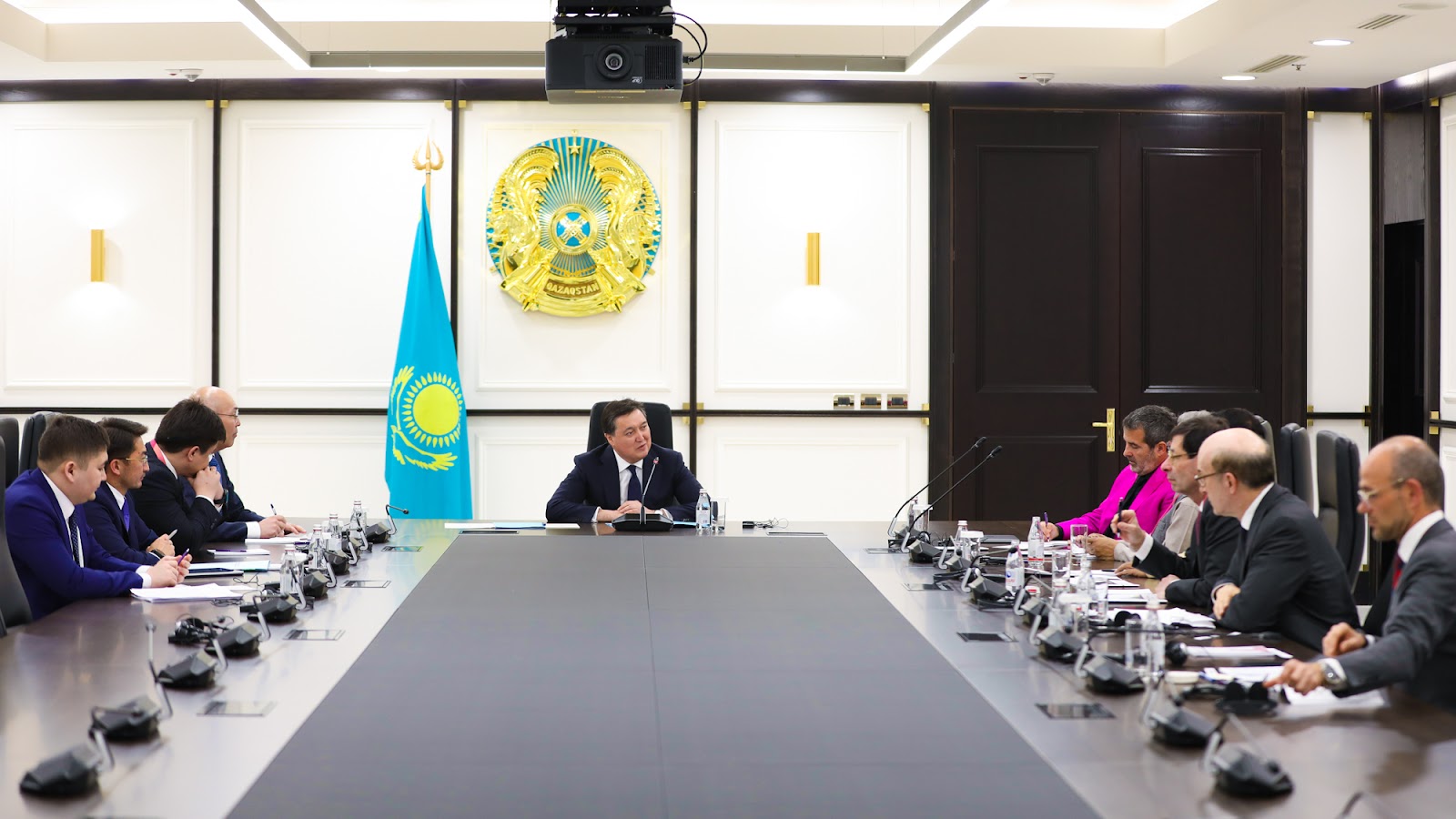 The current trends of the world economy, including the development of innovative technologies, the digital industry, the mobilization of human capital, inclusive development, and the maximization of the potential of the fourth industrial revolution, were examined. The roundtable participants agreed that for the further growth of the economy it is important to give priority to social issues, the development of human capital, and the provision of jobs. 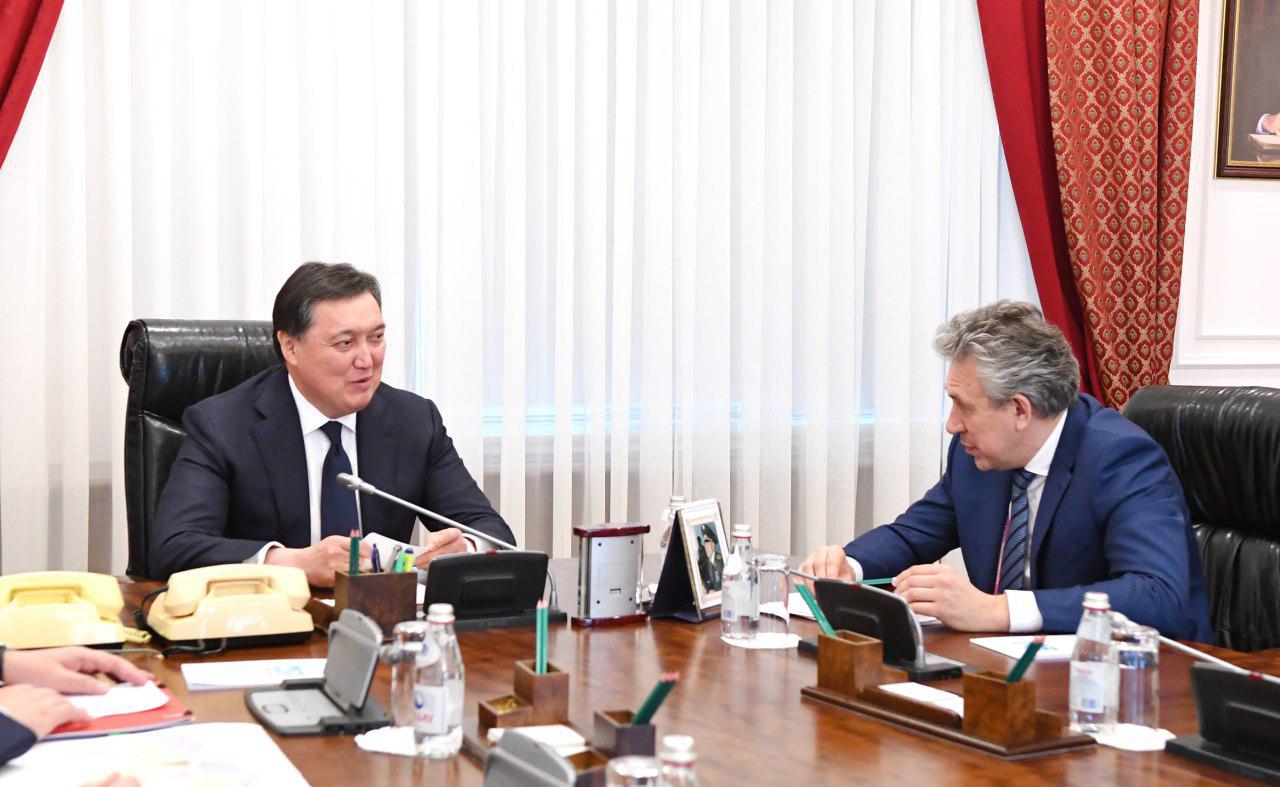 During the meeting with the General Director – Chairman of the Board of Rosgeology JSC Sergey Gorkov, a wide range of topical issues of cooperation in the field of geological exploration and subsoil use was discussed. The prospects for deepening the interaction of the companies Kazgeology and Rosgeology in the development of the mineral resource base of Kazakhstan and Russia were considered.