Taxes from IT companies increase by 46% — Bagdat Mussin 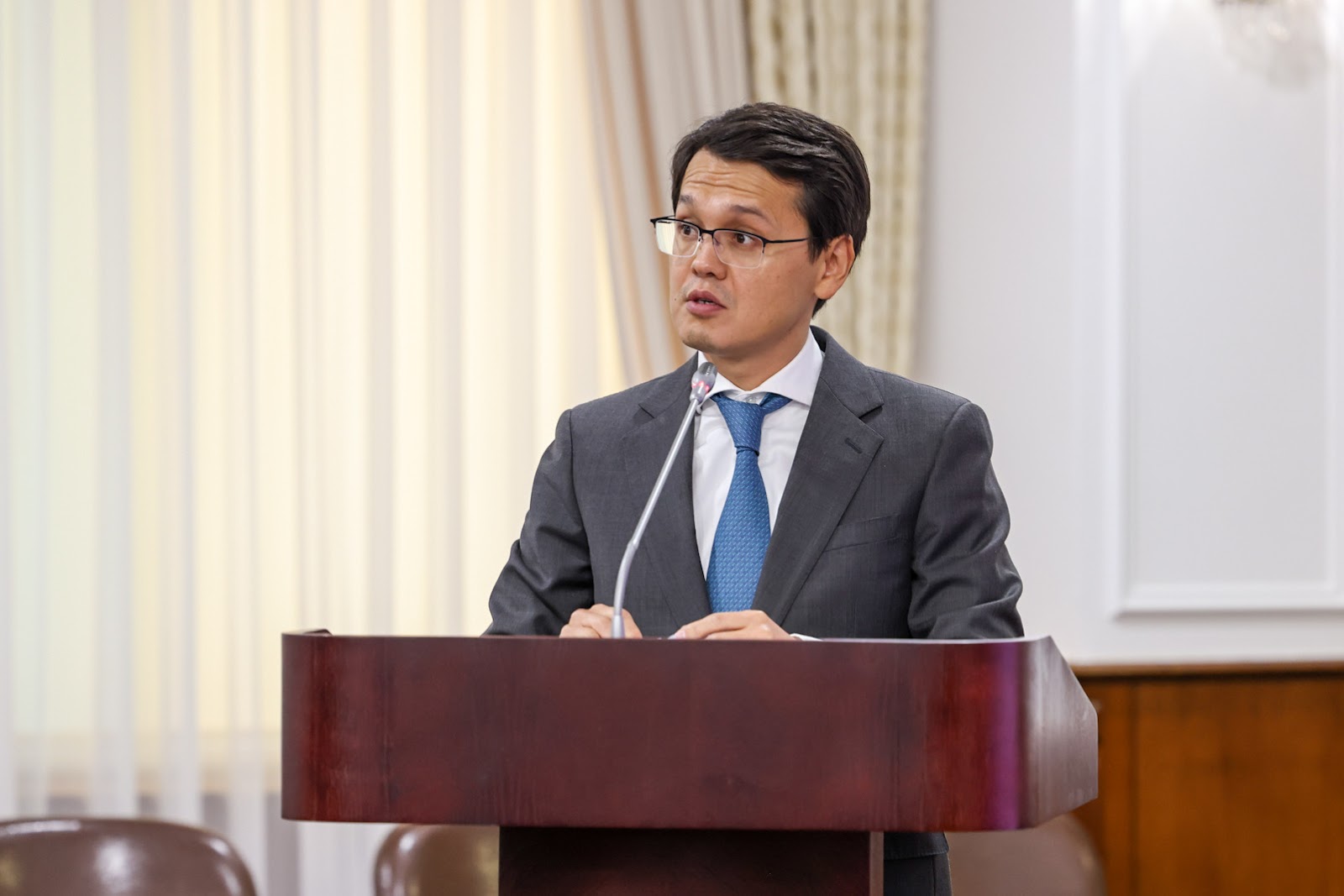 The progress of the Technological breakthrough through digitalization, science and innovation national project was discussed at the Government meeting, chaired by Prime Minister Alikhan Smailov. The Ministers of Digital Development, Innovation and Aerospace Industry Bagdat Mussin, Science and Higher Education Sayasat Nurbek made reports on the topic.

According to the head of the Ministry of Digital Development, it is planned to implement 85 activities under the Technological breakthrough through digitalization, science and innovation national project this year.

In turn, conversion to electronic format of public services is carried out in accordance with the plan, the share of which has reached 94%. A further goal is the transition to a proactive format of work. The number of such services has now reached 25.

Today, the most popular public services are already available on smartphones. Compared with last year, their use has increased by 17.5%. The availability of services on such popular platforms as Halyk and Kaspi has a positive effect on this indicator.

"Also, we implemented the possibility to receive 9 public services via video service without visiting Population Service Centers. By the end of the year we will bring their number to 44. Modernization of the Population Service Centers is carried out according to the plan, 8 new front offices are already serving the population. By 2024, 115 customer service centers will be modernized," Mussin reported.

In addition, according to the instructions of the Head of State, the Ministry of Digital Development has built a reference database of all families in Kazakhstan. The base daily updates information on 80 parameters of the well-being of 6 million families in the country.

"Now through daily scoring, we can see how many families fall under what risks. This will allow us to switch to a proactive format of providing social assistance to those in need. The digitization of the family's social card and its integration with the "Social Wallet" project allows us to implement a voucher system of state support. For example, a voucher system based on a proactive dispensing service. In particular, the voucher of the recipient of free drugs will be deducted from his account when he downloads a prescription from the clinic to his cell phone and presents it at the pharmacy to get the medicine," the Minister of Digital Development informed.

In order to reduce the paperwork of the state apparatus according to the concept of "hearing state" civil servants were given tablets. An additional 450 tablets will be issued in the near future.

Bagdat Mussin also spoke about simplifying the mechanism of integration through Smart Bridge. Now it is forbidden to request information available in Smart Data Ukimet. By the end of the year 900 reports will be available in the SDU digital reporting catalog.

The transition of state-citizen communications to digital interaction tools has begun. For example, the e-Otinish platform has proven its effectiveness.

The Ministry of Digital Development has carried out an integration with the Supreme Court to make it easier to apply to the administrative court.

"We receive feedback from the population on the quality of public services. For example, we evaluated about 800,000 services in eGov. A pilot project on robotization of 1414 consultation services using artificial intelligence technologies is being implemented," the Minister said.

On digitalization of akimats a typical architecture and a new reference standard of "smart cities" have been developed. Today there are basic requirements for a "smart city" in 25 priority areas. However, in a number of regions, "smart city" projects are implemented slowly. As an example Bagdat Musin cited PACS-technologies for early detection of oncological diseases, photo- and video-fixing systems and electronic ticketing. In particular, the average share of cameras brought to the DTC in the country is 29%. In this regard, akimats need to intensify work on the implementation of basic projects on Smart City.

As a result of the digitalization measures carried out by the Ministry of the Internal Affairs, the number of video surveillance cameras has increased, which has had a positive impact on the prevention of crimes and offenses. Thus, the proportion of digitalization of criminal cases is growing.

On the "Single platform KAZNEDRA" today in the test mode launched the platform minerals.gov.kz. Even now the subsoil user may use one thousand and a half electronic reports displayed on interactive map in his personal cabinet. By the end of this year additional 30 thousand subsoil users' reports will be submitted in electronic version.

In addition, through the platform there is an opportunity to apply for a corresponding license for subsoil exploration and mutual electronic correspondence with the authorized state body. In the future, this platform will work as a marketplace for subsoil users.

As part of the digitalization of the housing and public utilities, construction and transport sectors, an integrated information system of accounting for scrap ferrous and nonferrous metals was put into operation. The eQurylys platform is used to control the construction of 92 national highways. BIM-technologies are applied in the state expertise, a pilot is being conducted in 3 cities.

In the sphere of housing and communal services the "e-Shanyraq" system has been started, more than 6 000 passports of local railways all over the country have already been created.

In the agricultural sector from July 1 this year the system of subsidies was launched. It has all the information necessary for farmers on measures of state support, which will allow, among other things, to reduce costs to farmers by 30%, reduce red tape with documents in general.

A mobile farm animal identification application has been created.

"All veterinary officers will be given tablets, as were previously issued to traffic police officers. It is very important that farmers in remote areas will have the opportunity to work in the system even without the Internet," Bagdat Mussin said.

In the fuel and energy sector the information system "Oil and Gas Condensate Accounting" was put into operation. Now 94% of all controlled objects in this sphere are connected to it. All gas stations are also connected to the system. Now the information about sales and stocks of fuel and other raw materials will be available online.

As part of the "digital generation map" the certification of the main equipment of 59 stations was carried out; now the degree of wear and tear of equipment of each station will be available in online format.

On digitalization of education, one of the important projects is the conversion of the textbook portfolio into digital format. Of the existing 670 printed textbooks, 97% have been digitized. Full digitization will be achieved by the end of the year.

As noted by the head of the Ministry of Digitalization of the Republic of Kazakhstan, the Internet infrastructure will be fully brought to rural schools. However, digitalization of the educational process in rural schools is at a low level due to lack of distribution networks of internal Internet. On the part of MIE it is necessary to ensure 100% use of the Internet in the educational process in classrooms equipped with computers, including through WiFi wireless connection.

Also, as part of the Head of State's comment about the slow digitalization of the health sector, work is being done on the transition to the new eHealth architecture.

"This will make it possible to form a national passport of citizens' health, when a citizen will be able to see all diagnoses, tests, regardless of the place of service. Here the Ministry of Healthcare should make amendments to the National legislation in terms of motivating citizens to actively use remote medical care," Mussin explained.

In the direction of innovation development in the industrial sector, work is being done to create conditions for the replication of model digital factories. In general, the enterprises are provided with appropriate state support.

Earlier the quality of mobile broadband services was improved in 639 villages out of 768.

There has been a 46% increase in taxes from IT companies on the development of the IT industry. 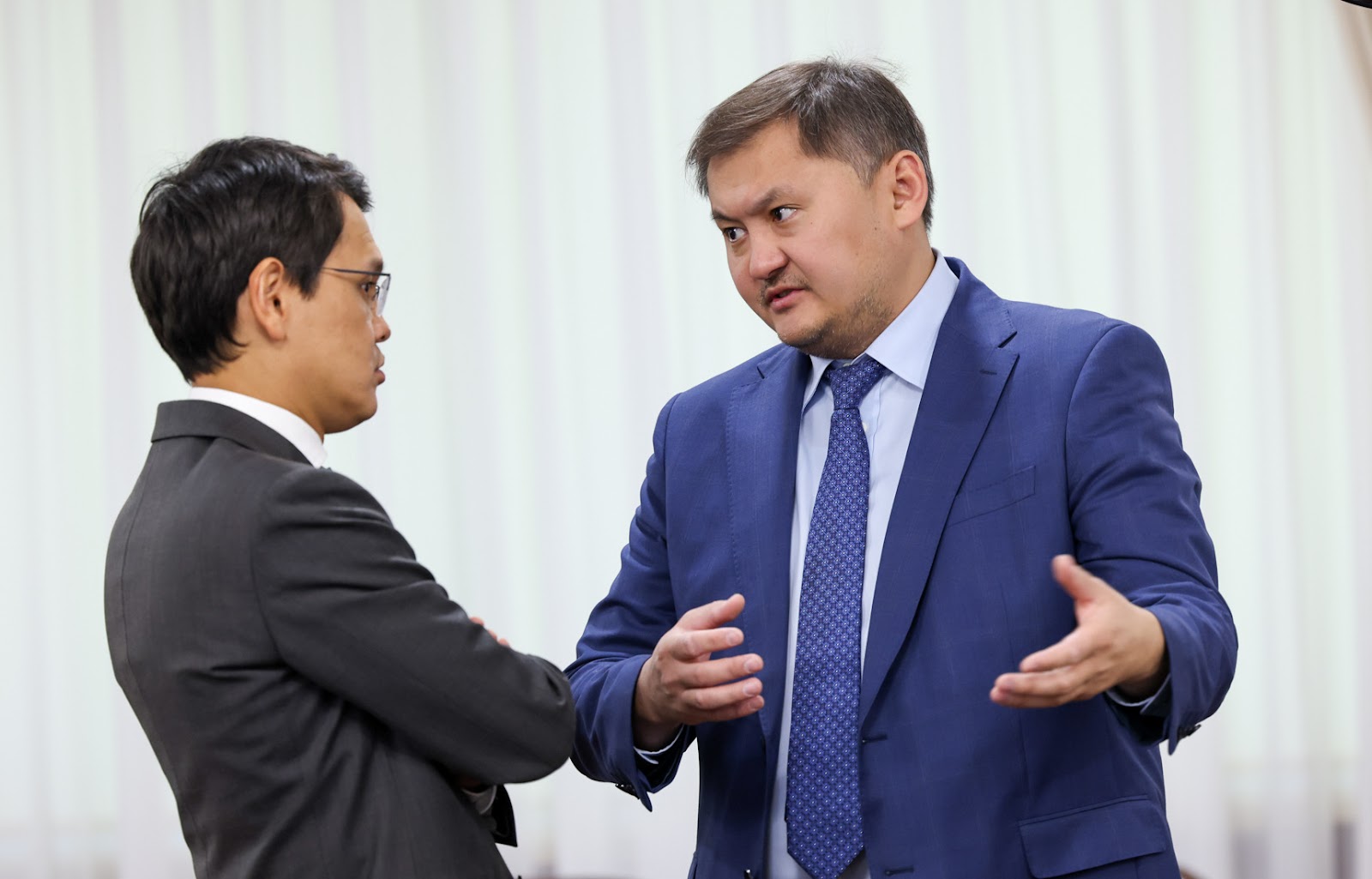 Minister of Science and Higher Education Sayasat Nurbek reported on implementation of the block "Science" in the framework of the national project "Technological breakthrough through digitalization, science and innovation. It provides for 4 main directions, 4 tasks, 7 indicators and 27 measures.

The tasks outlined in the "Science" block are aimed at solving the following problems:

2. increasing the competitiveness of the scientific ecosystem;

3. increasing the contribution of science in the development of the country: science-production-business;

4. improving the administration of science.

Scientists' salaries have doubled. We have introduced direct funding for research institutes engaged in fundamental research.

To support and encourage young scientists, 1,037 grants have been awarded to young scientists for scientific research and for post-doctoral studies under the Zhas Kalym project. Every year 500 grants are allocated for international internships. In 2021, 400 scientists were sent to world scientific centers. Since 2020, 50 "Best Researcher" awards have been given annually.

Postdoctoral fellowships have been established at 10 universities in the country, and scientists from research institutes and universities are involved in dissertation councils. The Scientific Association of Undergraduate and Graduate Students has been created to stimulate the research activities of undergraduate and graduate students.

For modernization of material and technical equipment of subordinated organizations allocated 1,7 billion tenge, research organizations and higher educational institutions have purchased about 800 items of scientific equipment. The share of renewal of equipment in 2021 amounted to 13.7%.

In 25.8% of research centers were audited for efficiency and effectiveness of their work and ongoing research.

The international rating "Scimago Institutions rankings" included 8 Kazakhstani research institutes and universities by results of scientific and publication activities. Also there is an increase of Kazakhstan's position in the InCites country ranking for the total number of articles in indexed scientific journals from 75th to 73rd place in 2021.

Along with this, within the framework of the national project in order to increase the contribution of science to the development of the country, work on the integration of science, production and business has begun. To achieve the goal, it is planned to increase the share of entrepreneurial sector expenditures on research and development to 50% of total expenditures and the share of commercialized projects to 30%. As well as to ensure a 30% increase in patent activity within R&D.

The work on creation of scientific and production clusters in the following directions was started:

1) Medical-biological and biotechnologies - on the basis of biopharmaceutical holding "QazBioPharm";

2) Agro-industrial science based on the National Agrarian Research and Education Center;

3) Green technologies based on Nazarbayev University;

4) "Energy efficiency" on the basis of the Institute of Nuclear Physics;

5) Mining and metallurgical complex based on the Kazakh Institute of Oil and Gas JSC;

In order to improve the administration of science, as well as to achieve the strategic indicator "Innovation Potential" in the World Economic Forum's Global Competitiveness Index, legislation in the field of science is being developed.

In 2021, the Law of the RK on amendments and additions to the legislative acts of the RK on science in terms of: inclusion of salaries of leading scientists in the base funding; introduction of direct funding of research institutes engaged in basic research; increased the terms of grant funding and PCF to 5 years; created the institute of appeal of decisions of the NNS and STEM.

Mechanisms were introduced for the formation of priority scientific and technical tasks of industries in accordance with the development priorities of the Republic of Kazakhstan. The Concept of development of science of the RK for 2022-2026 was developed and adopted, which provides for step-by-step implementation of measures and tasks of the national project.

"Implementation of the national project on the block "Science" will increase the contribution of science in the development of the country by increasing the number of scientists and researchers up to 34 thousand people, will have a social effect. By bringing the share of private co-financing of projects to 50% will have an economic effect," Nurbek S. said, adding that the financing of the block "Science" is more than 800 billion tenge.